END_OF_DOCUMENT_TOKEN_TO_BE_REPLACED

Last night, a public consultation centre was held at the Waterloo Memorial Recreation Complex about Uptown Streetscape Improvement. More information can be found on the City of Waterloo’s website.
On the subject of protected cycling lanes in Uptown, TriTAG’s Chris Klein was interviewed on CBC KW’s The Morning Edition. Audio link here.

Tonight from 6 to 8PM at Waterloo City Hall the city will be holding an open house on the Waterloo trail network including an interior trail loop.

Here are some other things we’ve been reading lately:

The Atlantic Cities: A Tour of a Whole Country That Has ‘Transformed Itself for Cycling’
The Atlantic Cities: The City Where Bicycles Rule the Road (and how it got there)
Take The Lane: How Many Cycling Communities Are There?
Spacing: (Toronto) Cycling Think & Do Tank: Cyclists, Public Space and Auto-Amnesia
Bike Portland:  Bike trips up 15% on NE Multnomah after installation of protected bike lane
Take the Lane: Signage is vital for cycling infrastructure

In the upcoming weeks, Grand River Transit will be hosting Public Consultations for the Proposed 2013 Transit Service Improvement Plan. This includes the implementation of an express bus route running from the west end of Waterloo from the Boardwalk to the Northeast Corner of Waterloo at RIM Park via University Ave. Also being discussed will be route adjustments in Kitchener and Waterloo set to be implemented in September 2013. Maps will also be provided so you will be able to draw your preferred routes along the corridor.

Consultations will be held at the following dates and locations:

You may also view these events on TriTAG’s Public Events Calendar and copy them to your own calendar.

Update: With work on Highway 7 expected to begin in 2015, there appears to be little chance of a change in plans for the road corridor. However, your support is still needed to ensure transit connections are prioritized between Waterloo Region, Guelph, and the rest of the GTA, including two-way all-day GO train service. Contact your representatives today.

With the upcoming Kitchener-Waterloo by-election, Ontario Premier Dalton McGuinty has pledged to construct an 18km grade separated 4-lane freeway. This 18km roadway will be placed along a new 100m wide right-of-way to the north of the existing highway, include a new crossing of the Grand River and include 6 interchanges. Of particular interest is the modification of the existing Wellington Street interchange with the Conestoga Parkway into a 4-level interchange with high-speed direct flyover ramps set to be a quarter of the cost of this project.

However, is the construction of a highway at an unknown cost (>400 Million according this presentation) best way to meet travel needs on this corridor? TriTAG’s position is that before a new highway corridor is constructed between Kitchener and Guelph, less invasive approaches to this issue involving transit need to be investigated.

END_OF_DOCUMENT_TOKEN_TO_BE_REPLACED

The Ontario Coroner’s Report on Cycling Deaths has sparked much reaction in the media lately, in particular surrounding the proposition of imposing a mandatory helmet law on cyclists. While this review is definitely worth a read, we feel that the helmet law in particular has overshadowed the rest and has stolen the attention of media to the detriment of the rest of the report. More on this in a later post.

With the exception of that one recommendation, the rest need serious consideration by all levels of government; in particular the implementation of a complete streets approach to road design, minimum passing distance for bicycles, and increased focus on educating drivers on how to share road space with people who ride bicycles.

The full report can be found here.

For those that don’t have time to look though the full report here is a summary of the report’s recommendations, read on…
END_OF_DOCUMENT_TOKEN_TO_BE_REPLACED

One of the main goals of rapid transit is to decentralize the bus network from a system of hub-and-spoke routes to a system of cross-corridor bus routes which connect to rapid transit stations. However, the current planned LRT station locations in Waterloo between Uptown and Northfield are not optimally placed to achieve this goal.

Currently, stations in the University area are planned at Seagram Drive and mid-block between University Avenue and Columbia Street: 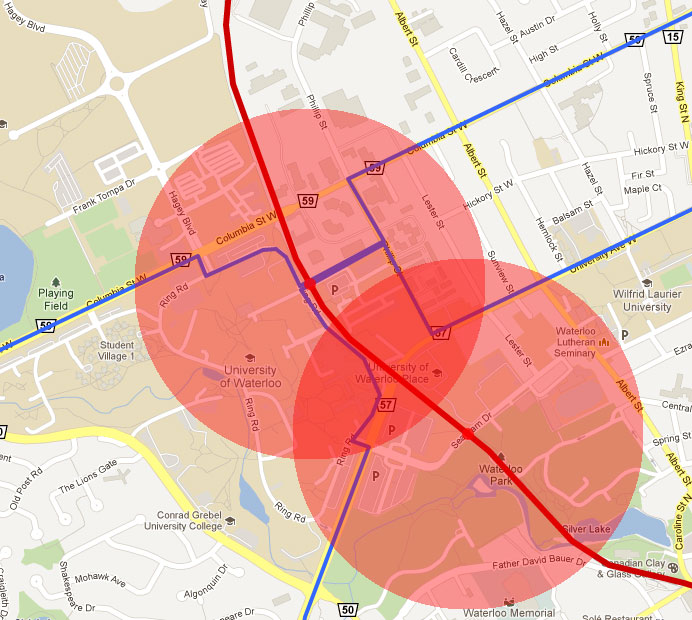 The issue with the above setup is that it would divert cross-corridor routes off their corridors and into a terminal station in front of UW Davis Centre. Diverting trips from these corridors would result in longer cross-town travel times, and would reduce the amount of mixed-use development potential at the cross-corridors. Anyone who has travelled on Routes 7 and 8 through Charles Street Terminal knows the frustrating experience that even a minor route diversion can have on your overall travel time. Time wasted sitting at a terminal is time spent thinking about how much quicker it is to drive or even walk.

As such, TriTAG supports altering the University station locations to the following: 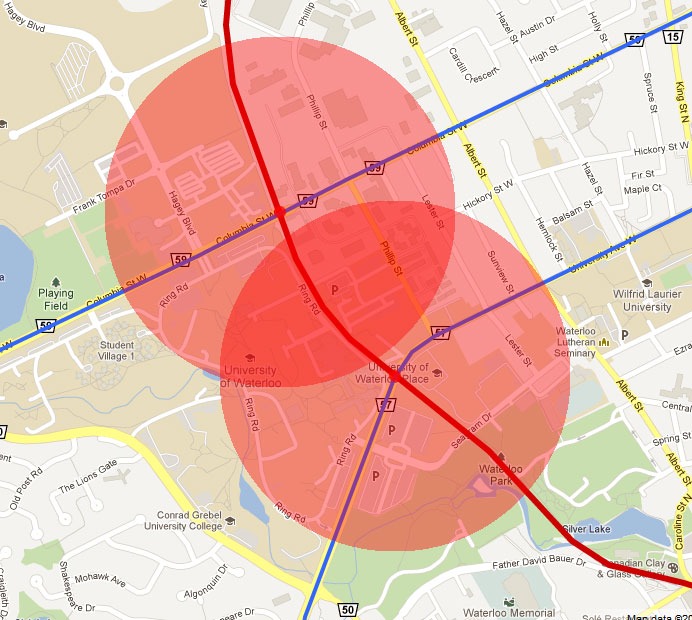 Placing a station at the street provides many benefits over a station mid-block: END_OF_DOCUMENT_TOKEN_TO_BE_REPLACED

On Tuesday, February 21st, TriTAG will be hosting an informal drop-in to get in touch with members of the community, and for people to share with us their concerns and ideas in the realm of transit and active transportation in the Region of Waterloo.

If you’d like to stop by for some pub fare and friendly conversation, feel free to join us at any time between 5 and 9 pm at the 3rd floor boardroom of Barley Works (Huether Hotel), at King & Princess in uptown Waterloo. Bring your ideas! We will have a digital projector set up for those who may want to put something on a larger screen.

Visit this link for the Facebook Event Page. We hope to see you soon!

On June 15, 2011, Regional Council will be voting on whether to approve Light Rail as the preferred option for rapid transit in the Region of Waterloo. As we find ourselves on the eve of one of the most important votes in the region’s history, it is important to remember that our Councillors are not only voting to fund a light rail transit line running from Conestoga Mall in Waterloo to Fairview Park Mall in Kitchener, but also on a funding strategy for the Regional Transportation Master Plan.

The RTMP provides a framework for transit funding improvements for the next 20 years, with steady annual increases in the per-capita level of funding for transit. By 2031 funding for transit operations will have tripled over current levels, and the modal share for transit is expected to triple to 17%. The document includes a guide for planned service increases and improvements, which will be reviewed as each year’s plans are put into action.

This plan approved by Council last year includes plans to implement a number of cross-corridor express routes which will supplement and feed passengers into the central rapid transit spine. In fact, the first of these new iXpress-style bus routes is due for implementation this September, and will run from the university district to Forest Glen Plaza along Ficher-Hallman Road. A number of other trunk express bus routes will soon follow on King-Coronation, University Ave, Ottawa Street, Maple Grove Road, Highland Road, and Victoria Street North.

Although not shown on this map, the RTMP also includes plans to restructure local bus routes in the suburbs so that they are more direct and reliable. Routes 7, 12, and 29 are all seeing routing changes this year that will improve on-time performance and create more direct routes between origins and destinations.

Also arriving this year is GO train service from Kitchener to Toronto at the existing Kitchener VIA station. The Region has also purchased lands at the corner of King and Victoria to construct a new inter-modal terminal for GO, VIA, LRT, GRT, and other intercity coach services all in one location.

Cambridge is also not being left out of tomorrow’s vote. Regional staff are recommending that the region put forward $1 million a year to implement transit-supportive strategies in Cambridge to increase ridership. In addition, staff are recommending that Phase 2 from Fairview to Ainslie begin its project assessment in 2014, that land be purchased for Phase 2 as soon as feasible, and that a location for an inter-modal terminal for GO rail service and GRT be explored.

The agenda for tomorrow’s council meeting, including the details of what is being voting on, can be found at this link. If you would like to attend, the public Council session will begin at 7pm at 150 Frederick Street in Kitchener (the building with the orange roof). If you want, you can RSVP to the Facebook event here.

If you can’t make it, we will be covering the event live on Twitter with #LRTvote, and it will be broadcast on Rogers Cable 20.