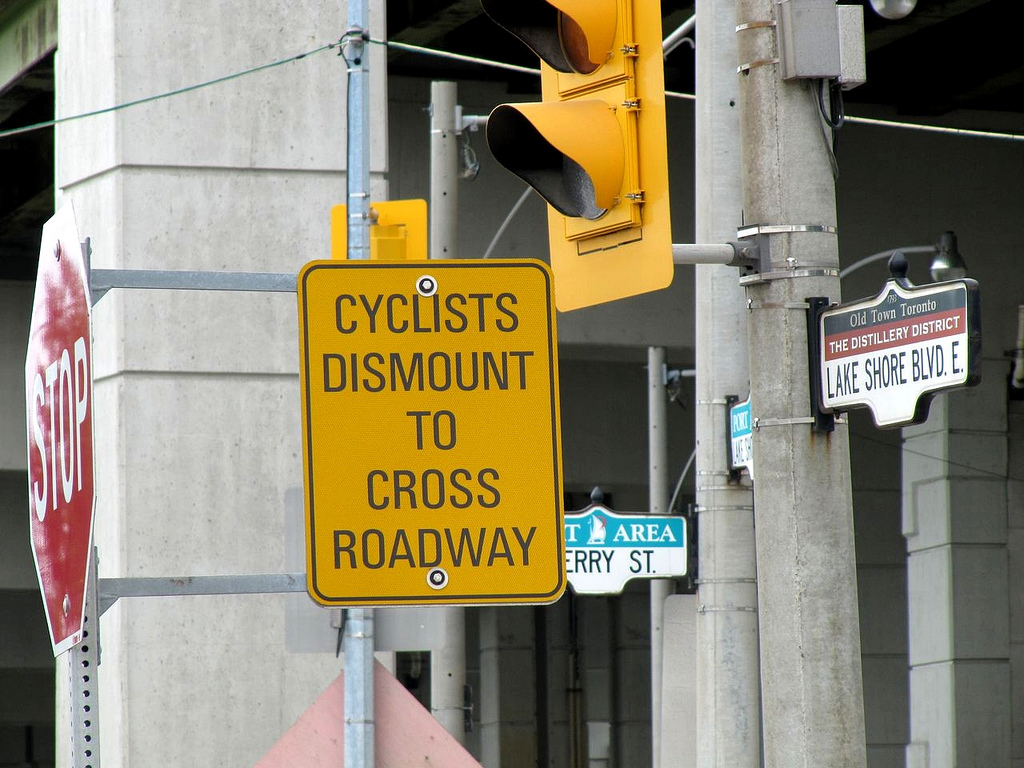 It’s no surprise that over half of all collisions between bikes and cars take place in crosswalks. It’s partly why our local municipalities have opted to prohibit sidewalk cycling in their bylaws.

Some might argue it’s the victim’s own fault if they’re struck while biking in a crosswalk, as they’re willfully breaking the rules of the road. But when it comes to other issues of public health, such as smoking, substance abuse, or even sedentary lifestyles and poor diets, we don’t allow a person’s choices to prevent us from trying to protect them from unnecessary illness, injury, or death.

Preventing traffic violence should be no different.  In fact, traffic engineers recognize that they can’t just expect drivers to perfectly follow speed limits or obey signs to protect themselves, but have to apply good design and analysis to protect drivers from their own mistakes, (not to mention their passengers or others on the road). This may involve changing the environment so that mistakes are less deadly, or changing the factors which influence people to make those mistakes in the first place.

Each year as part of the Region’s collision report, the top locations for crashes are determined for people driving, walking, and biking, and countermeasures are considered to try to reduce frequently encountered types of collisions. For top collision locations for cars, changes  including conversions to roundabouts, addition of left turn lanes, and dedicated turning phases are considered. For many of the top locations where people walking are struck, better lighting, countdown timers, more visible markings, and crosswalk relocation are all on the table. For King and Cedar, where several people biking with the sharrows have been struck by turning cars, staff are considering restricting certain turns. 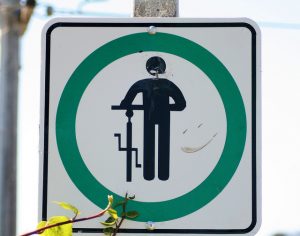 This sign is used to tell people biking to dismount and walk, which the Ontario Traffic Manual discourages. Photo (C) 2011 Richard Masoner on Flickr, licensed under CC-BY-SA.

But when it comes to people getting hit by cars while biking in crosswalks, it seems the best staff think they can do is put up a bunch of ‘cyclist dismount’ signs.

The province’s bicycle facility guidelines discourage installing ‘dismount’ signs because they aren’t frequently obeyed, and worse, can influence people to ignore other signs and signals:

There are several other important reasons why putting up dismount signs aren’t a great idea:

Sometimes, paying attention to the actual factors that change behaviour and influence collisions is hard, and putting up signs can make us feel like we’re doing something. Preventing people from being struck by cars in crosswalks requires more than just tsk-tsking them for not dismounting from their bikes, but appropriate infrastructure with good design to accommodate them. We hope to find better solutions in future collision reports. 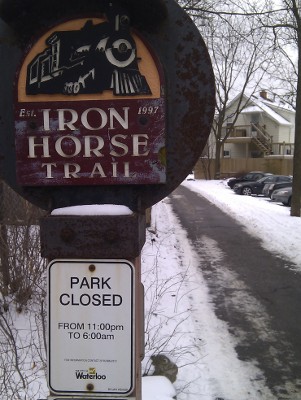 It can be insightful to take another perspective on something we’re used to. Yesterday I walked the length of Kitchener-Waterloo’s Iron Horse Trail and photographed it from its most common vantage points — the roads crossing it. There is little immediately evident in these photos, but I will explain below. END_OF_DOCUMENT_TOKEN_TO_BE_REPLACED