In a recent post we suggested that Greyhound might not have the license to operate service between Waterloo Region and the Toronto Pearson airport. Greyhound has been in touch to tell us that we’re mistaken. Quoting the letter from David Butler (Regional Vice President, Eastern Canada):

Over the years Greyhound has acquired many licences through acquisitions of companies like Voyageur, Gray Coach and PMCL to supplement our own P.V. licenses. I wish to confirm that Greyhound does indeed hold all the required operating authorities to provide this service under the P.V. licences issued to it by the Ontario Highway Transport Board (“OHTB”). This was verified before the service commenced, validated with senior staff at the OHTB and, prior to their coming into force, the schedules for these services were duly filed with the OHTB as is required by regulation. Greyhound has long supported, and faithfully followed the OHTB regulations in regards to our services in Ontario.

When we had contacted the OHTB, they were unable to provide a listing of services licensed to operate between Waterloo Region and Toronto Pearson airport. They were able to provide the license when given a company name, so we had requested those for Airways Transit and Greyhound. We had not anticipated that subsidiary companies would have separate licenses. We have not yet been able to track down the specific license that applies in this case, but we do not have reason to doubt Greyhound’s word here.

We are very excited about the initial response to this new service. We hope to increase frequency to match demand.

We, too, are enthusiastic about useful new transit service from Waterloo Region and increased frequency!

We’re happy to have been mistaken about the status of Greyhound’s airport service. The main question at this point is what exactly the province is doing in its review of intercity bus regulation. There have not been any public updates in many months. As it stands, it is hard to find information about intercity bus service in Ontario and, consequently, hard for new entrants to improve such service. 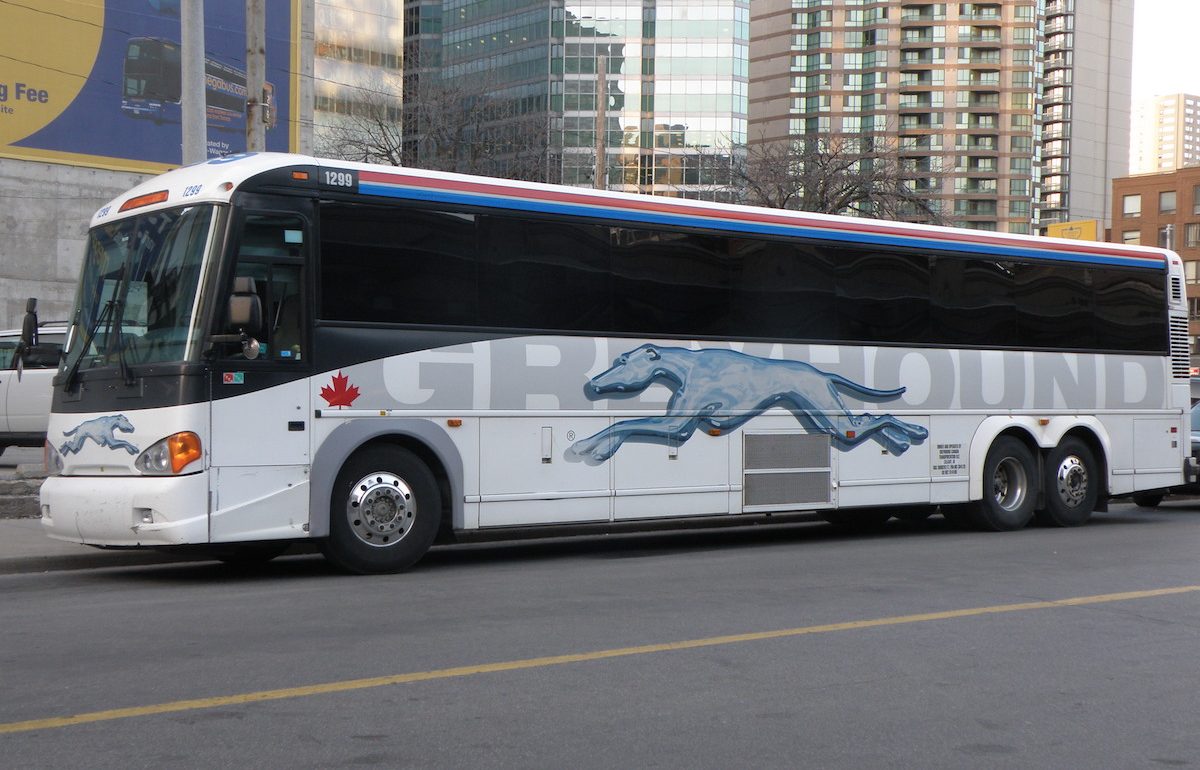 Update: Greyhound has reached out to let us know that they do, through a subsidiary, have a license to operate this service. Please see our new post for an update. Below is the original post.

Greyhound recently launched scheduled service between Waterloo Region and the Toronto Pearson airport, to much fanfare. To many, this is an obvious and useful connection. It is also, as best as I can tell, illegal under Ontario’s Public Vehicles Act.

Ontario has a licensing system for intercity bus service (that we’ve written about before) which effectively grants perpetual monopolies for a private company to run scheduled service on a corridor. GO Transit, the regional transit agency operated by the provincial government, is exempt from these regulations, but prefers to avoid its buses directly competing with private carriers. Last year the Ministry of Transportation put forward a deregulation proposal that is still under review.

Greyhound and Coach Canada are the biggest beneficiaries of the current licensing regime. For Waterloo Region in particular, Greyhound provides the direct service to Toronto, Guelph, and London – and no other private carrier is allowed to. It has poor reputation among riders, but there’s no other direct options. Similarly, Coach Canada provides the direct service to Hamilton. And Airways Transit provides scheduled van service to Toronto Pearson airport.

I was curious how Greyhound dealt with the system given Airways Transit’s license, so I looked up recent issues of the Ontario Gazette (where new license applications must be published). Failing to find anything, I emailed the Ontario Highway Transport Board, and was able to obtain the current operating licenses for Airways Transit and for Greyhound. And indeed, Greyhound’s license not only doesn’t allow airport service; it explicitly prohibits it.

Greyhound is using a move from Uber’s playbook, with the difference that it’s already the dominant player. The same licensing system that serves to protect profitable monopoly routes for Greyhound is the one that it’s apparently breaking in order to get more business.

If this is the case, it is not a tenable situation. If Greyhound can brazenly and intentionally break the rules, then there shouldn’t be anything stopping anyone else from offering service that would break Greyhound’s stranglehold on bus service along the Highway 401 corridor.

In a recent post, we took a look at the issues with Ontario’s intercity bus system, the role of the Ontario Highway Transport Board (OHTB), as well as what we don’t know. Since then I’ve spoken with Felix D’Mello, Board Secretary at the OHTB, and I can shed some light on current licence holders and cross-subsidies. It turns out to be a simpler story than I had anticipated.

Here are the questions I raised earlier:

Clarity from the OHTB is needed on what, exactly, is the current state of intercity transit in Ontario. Which companies hold the licence for which city pairs, and what amount of service do they provide? What cross-subsidized service is provided by private companies, and what are the arrangements supporting it?

END_OF_DOCUMENT_TOKEN_TO_BE_REPLACED

[Update: Our new post provides some important information about the below discussion.]

Here in Waterloo Region, people love to complain about Greyhound buses to Toronto, but few complain about Ontario intercity bus regulation as a whole. They should, as it has much to do with the relatively poor quality and availability of intercity transit here. Now Coach Canada and Pacific Western Transportation (PWT) have launched a campaign for “modernization” (read: deregulation) of the Ontario intercity bus system, with a “Where’s The Bus?” website aimed at the general public.

Where’s The Bus points to more competition and innovation as reasons to deregulate. And to its credit, PWT has shown innovation and competition with its successful luxury Red Arrow service between Calgary and Edmonton. But Ontario intercity bus regulation is an important issue, and one on which more than just financially interested parties should weigh in. END_OF_DOCUMENT_TOKEN_TO_BE_REPLACED