In a recent post, we took a look at the issues with Ontario’s intercity bus system, the role of the Ontario Highway Transport Board (OHTB), as well as what we don’t know. Since then I’ve spoken with Felix D’Mello, Board Secretary at the OHTB, and I can shed some light on current licence holders and cross-subsidies. It turns out to be a simpler story than I had anticipated.

Here are the questions I raised earlier:

Clarity from the OHTB is needed on what, exactly, is the current state of intercity transit in Ontario. Which companies hold the licence for which city pairs, and what amount of service do they provide? What cross-subsidized service is provided by private companies, and what are the arrangements supporting it?

As Mr. D’Mello explained, the role of the OHTB is only to grant operating licences according to its criteria. Operators must provide 30 days notice to reduce or abandon scheduled service — but to the Ministry of Transportation, not the OHTB. So the OHTB does not have a roster of current scheduled service. Nevertheless, according to Mr. D’Mello, there are few or no cases of multiple operators on any given route.

A big unknown has been about whether there are arrangements for private bus companies to cross-subsidize routes. Mr. D’Mello’s answer is blunt: there are no such arrangements at the OHTB. Cross-subsidy is simply not a consideration when a company applies for an operating licence for a route. The upshot is that there isn’t more than meets the eye. Perhaps all we need to understand the current system is OHTB’s standard of “public need & convenience” for granting new licences and the ability for existing operators to object to new licences.

Virtually all licence applications coming in to the OHTB now are for charter services. For new scheduled service, the standard of “need & convenience” is hard to meet. In many cases it is quite likely that there is not enough profit on the route for a second operator to come in, and companies are aware of that. Moreover, the existing operator for a route will immediately oppose a new application, presumably working hard to show that existing service meets all needs. This kind of legal and regulatory process can probably get expensive quite quickly, so few companies would be interested in trying to battle the major operators. And those major operators, mainly Greyhound and Coach Canada, wouldn’t benefit from eroding each others’ protected profit streams on their respective corridors.

So where does that leave us? We have a system which makes it virtually impossible for new entrants to provide private scheduled bus service in Ontario. This protects the business of an operator on a marginal route. A bus company can thereby provide scheduled service with cross-subsidy from runs at more profitable times to less profitable runs that are needed as part of a reliable service — knowing that another company won’t come in and cut into their profit from the best parts.

At the same time, not all corridors fall into that marginal category. And on those corridors with high demand, there is no opportunity for new entrants or competition to better meet demand and to provide better service. 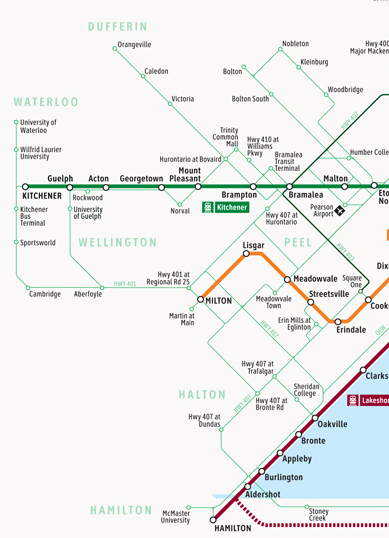 A portion of GO Transit’s current rail and bus network.

Except for GO Transit, of course. As mentioned in the previous post, GO Transit is exempt from licensing requirements. When Greyhound threatens to make cuts because of GO Transit coming in to provide Kitchener-Toronto service, there’s no cross-subsidies to other routes at play, contrary to what I suggested earlier. However, if it adds enough service for Greyhound to decide its profits are too low, GO Transit should be prepared to replace the entire corridor’s service.

And isn’t that an option worth consideration? It’s an interesting way forward from the current regulatory environment: if Greyhound can run service at a profit between Waterloo Region and Toronto, why not have GO Transit take over and bring that benefit to the public instead? Why not have GO Transit serve as an integrated bus and rail regional agency, rather than a commuter one? GO Transit is well-positioned to consider the needs of a coherent region-wide transit network, and it has already blurred the lines between commuter and intercity transit with regular services such as Hamilton-Toronto and Waterloo-Mississauga.

One interesting Canadian example suggested in the comments was Saskatchewan Transportation Company, a publicly owned agency, albeit with a focus on rural transit.

There’s many examples throughout North America of deregulated intercity bus markets, of the type Coach Canada and Pacific Western Transportation are pushing for, many of which are quite reasonable. But there’s few, if any, bus companies in North America with the kind of positive reputation among their riders that GO Transit has, nor with the kind of regional transit integration that GO Transit can provide as a public agency.