Update: With work on Highway 7 expected to begin in 2015, there appears to be little chance of a change in plans for the road corridor. However, your support is still needed to ensure transit connections are prioritized between Waterloo Region, Guelph, and the rest of the GTA, including two-way all-day GO train service. Contact your representatives today.

With the upcoming Kitchener-Waterloo by-election, Ontario Premier Dalton McGuinty has pledged to construct an 18km grade separated 4-lane freeway. This 18km roadway will be placed along a new 100m wide right-of-way to the north of the existing highway, include a new crossing of the Grand River and include 6 interchanges. Of particular interest is the modification of the existing Wellington Street interchange with the Conestoga Parkway into a 4-level interchange with high-speed direct flyover ramps set to be a quarter of the cost of this project. 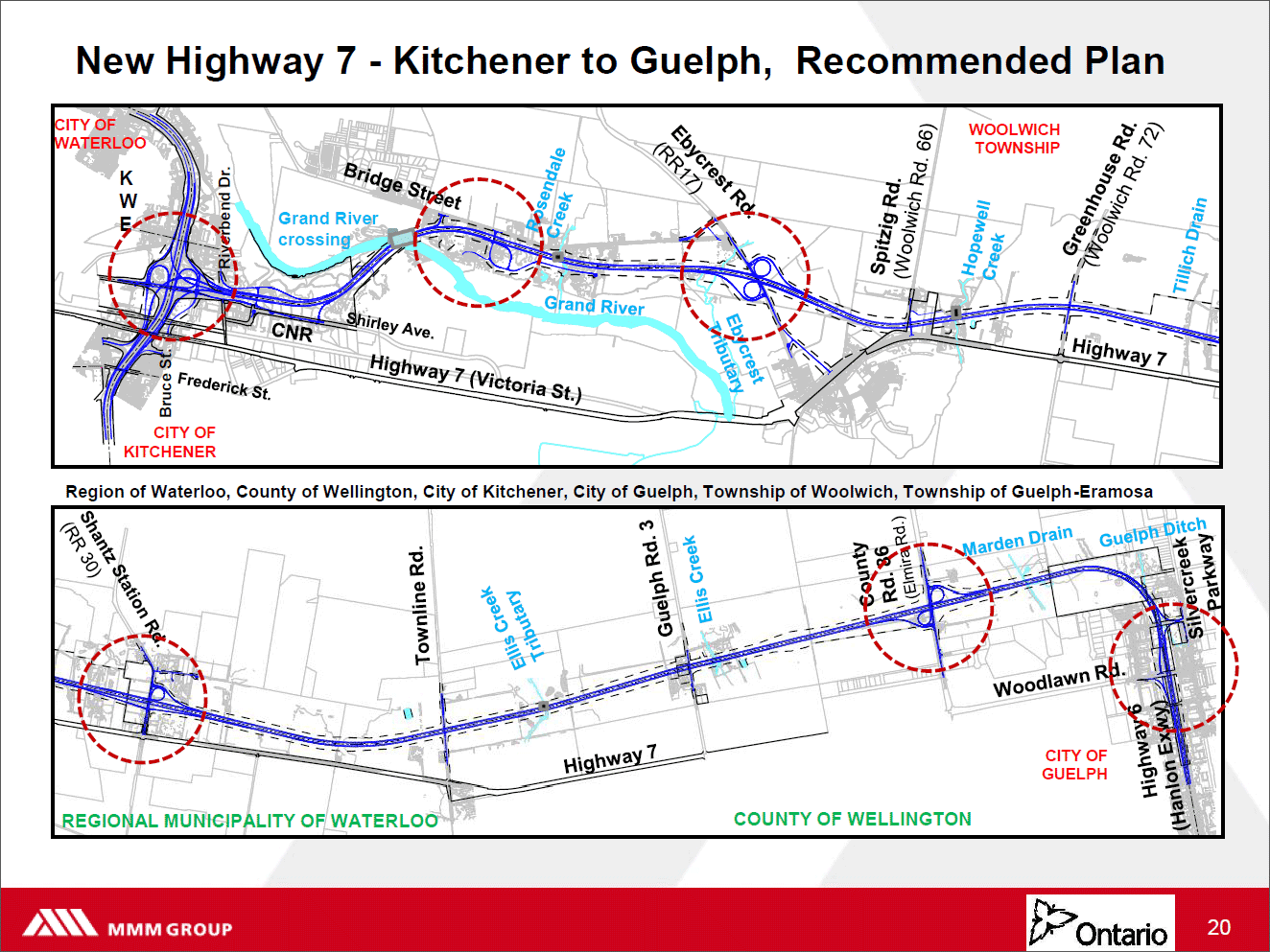 However, is the construction of a highway at an unknown cost (>400 Million according this presentation) best way to meet travel needs on this corridor? TriTAG’s position is that before a new highway corridor is constructed between Kitchener and Guelph, less invasive approaches to this issue involving transit need to be investigated.

GO Trains leave for Toronto at 5:52 and 7:00 AM for Toronto and arrive back in Kitchener at 6:42 and 7:42 PM. [link to the timetable] For a person travelling to Guelph for business from Kitchener these early morning departures are not convenient. And while is is possible to get from Guelph to Kitchener or vice-versa on a GO bus for a day trip, the trip will take more than an hour and a half via the 401, and will require a transfer at a park-and-ride lot at Aberfoyle.

Greyhound provides the only direct bus service between Kitchener and Guelph via Highway 7, maintaining a monopoly on this route. With a travel time of 40 minutes Greyhound does offer a somewhat-competitive alternative to diving (which takes ~30 minutes downtown to downtown). However at the cost of $11.88 (web fare) or $13.20 (on the platform) a round-trip on Greyhound can cost in excess of $25. Additionally, with trips that leave every 2 hours on average (longer on weekends), there is a lot of potential travel demand that is not being served.

Transit strategies in both the Region of Waterloo and Guelph recommend the implementation of conventional bus service and eventual bi-directional DMU rail service between Kitchener, Guelph and Cambridge. However, there are no solid plans to begin this type of service in the future.

The current highway 7 proposal dates back to 1989 and was originally submitted in 1997. The plan was placed into a review period and finally approved on March 21, 2007. The development of this plan largely predates provincial legislation such as the Places to Grow Plan and local plans like the Regional Growth Management Strategy which put a strong emphasis on solidifying the countryside line an intensifying urban areas

While it is argued that the current highway is unsafe, there is much more that can be done to the existing highway corridor to improve its safety such as installing traffic signals, paved shoulders, rumble strips, or a concrete median.

There are also a number of less-costly measures that can be done to increase the existing capacity of the road network, such as expanding the existing 2-lane roadway to 4 lanes, providing left turn refuge at crossroads, and making local road improvements at the existing Highway 7/Conestoga Expressway junction.

If it is deemed that a new highway between Kitchener and Guelph in the manner that is proposed is necessary, then alternate financing needs to be investigated; in particular the implementation of tolls. Ontario’s Ministry of Transportation is currently in the process of acquiring land to begin construction of an eastward extension of Highway 407 in 2015. This road is planned to be a provincially-owned extension of the existing toll route. Tolls have also been discussed as a source of revenue on Toronto’s municipally-owned highways. Road pricing can be variable to match demand so that the heaviest tolls are collected during peak use and lesser tolls at times where there is less use. Tolling in this manner would allow optimal use of the new highway at all times.

Before a full highway is constructed, meaningful transit service designed with the intention of removing vehicles from Highway 7 needs to exist where none currently does. Additionally, there are number of less expensive alternatives that would improve safety and traffic flow on the two-lane roadway without necessitating the construction of a new highway corridor at the hundreds of millions.  While Greyhound, VIA, and GO run service between to two cities, the expensive, infrequent, slow, and unintegrated nature of their service makes it un-useful for those who would otherwise consider taking it as an alternative to driving.