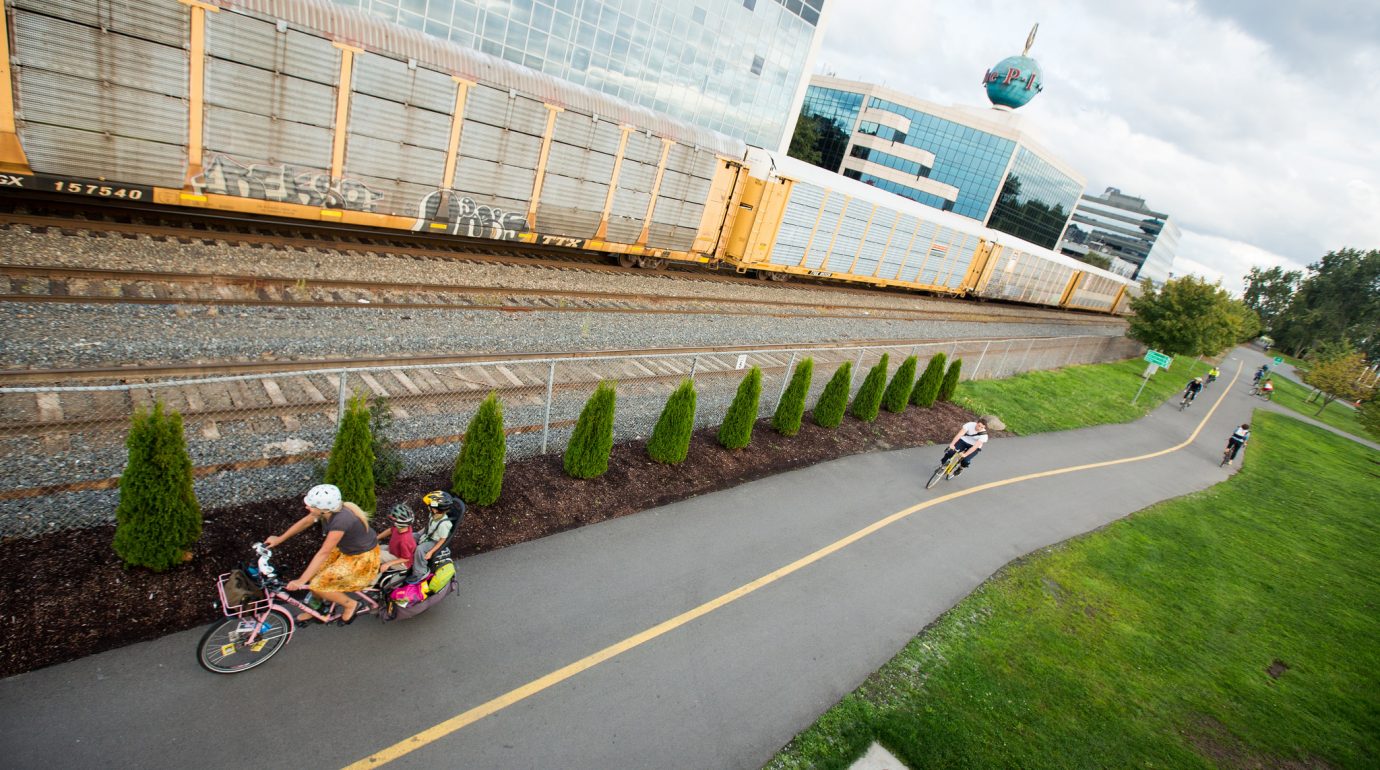 You get what you pay for. It’s a pithy saying, but it holds a lot of truth – if you’re not willing to invest enough to make something work, it most likely won’t.

The phrase has significance to the proposed trail connection between the Iron Horse Trail and the future transit hub at King and Victoria. If costs become the sole focus in planning, this trail will not attract people to walk and bike along it to get to the hub. Unfortunately, that may be the road we’re going down, literally.

The ideal route (option 1) would follow the CN railway tracks, possibly along the north side from one end to the other. Since GO stores two of its trains there, this option may not be realistic. An alternative (1a) crosses to the south side of the tracks at Park to avoid the train layover and crosses the GEXR rail spur at Joseph Street. This too may be difficult to achieve, and is the most expensive option, in part because of the extensive property acquisition required.

A second pair of alternatives (options 2 and 2a) follow the creek through Raddatz Park, travel on-road along Waverly Road to Strange Street, pass through Cherry Park, and then follow Stewart Street to the spur crossing at Joseph Street, where it then follows on the south side of the tracks. With daily traffic of 1500 cars, Waverly is a bit busy for an on-road route, (Vancouver tries to limit on-road cycling routes to roads with fewer than 1000 cars per day), but this is a fairly short stretch for which we’d hope the Region and Kitchener consider traffic diversion measures. As the route crosses Strange just 50 metres from a pedestrian signal, it may be worth considering if that signal could be moved to better facilitate trail traffic.

The staff preferred alternative (option 3) is also the cheapest, consisting mostly of an on-road route along Cherry Street. At Park, it would pass under the bridge on one side before continuing up as a path on the south side of the GEXR spur. Significant costs are saved by essentially having no infrastructure for half the route, and then using mostly city-owned lands for a trail.

Cherry Street sees 1000 cars per day in some sections, and also often sees (illegal) cut-through truck traffic. Some traffic diversion options may be possible in sections, like making it one-way from Strange to Park with a contra-flow bike lane, but these have yet to be considered by the project team – the concept as it stands now would just be signs and/or sharrows (as would be the case with on-street portions in 2 and 2a), which seems inadequate for what should be a premier route.

On top of this, the space below the bridge on Park is quite limited. From the public consultation, it was suggested this would be no wider than 2.5 m. Ontario Traffic Manual Book 18 recommends two-way in-boulevard shared path ways be 4.0 m, or 3.0 m at a very minimum. On top of this, the trail would run along a vertical wall face, which reduces the operating space by up to half a metre. In other words, the path would only be half as wide as it really ought to be. This is simply unacceptable, and it is troubling that staff would consider this to “mostly meet criteria” for comfort and accessibility.

The final alternative (option 4) is scarcely worth even mentioning, since it would have people cycling in the discontinuous gutters signed as bike lanes on busy Victoria Street. But the path up the GEXR spur itself may be worthwhile in conjunction with another alternative, provided it could be extended south into Victoria Park.

Staff have settled on option 3, the easiest and cheapest to pull off, but that doesn’t mean the public is best served by this alternative. But in order for staff to prioritize the quality of the route, they need to hear it from the public. Comments on the proposed alternatives are due Friday June 16, and whether you agree with staff’s preferences or not, we encourage you to send your feedback to help ensure this is the best possible connection it can be.

2 thoughts on “Blazing a trail or blasé signed routes?”