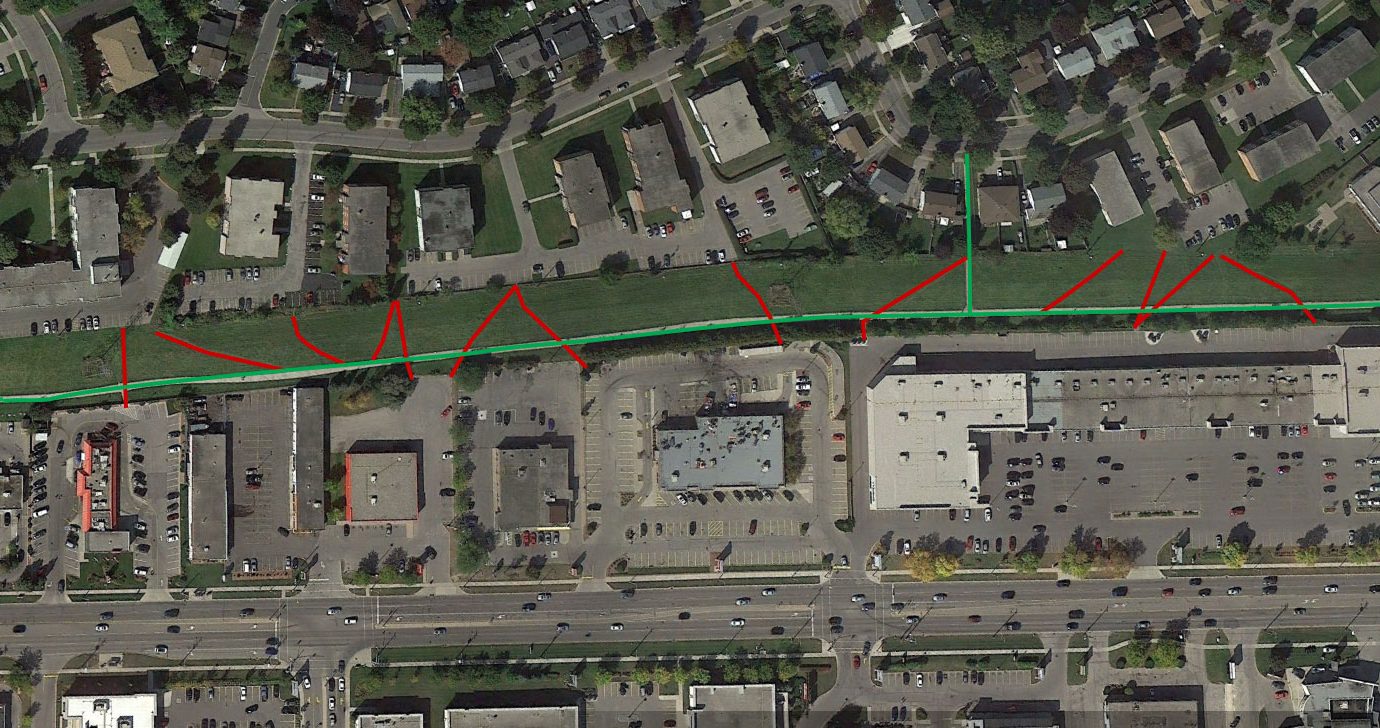 In August, we wrote about the missing crossing of the ION tracks from Traynor Ave to Fairway Ave in Kitchener. Without a pedestrian crossing, it means over a kilometre between crossings, and many residents are now cut off from services that used to be a walkable distance away.

Thanks to the help of the neighbourhood community, the issue made it on to the municipal radar, and the City of Kitchener recently had a public feedback session seeking feedback for a proposed crossing of the ION tracks. See the display boards here.

Read on for some analysis of what’s good, what’s bad, an analysis of how it will impact trips compared to before, and whether a crossing further west at 652 Fairway Rd (Fresh Burrito) might be better.

Update: The City of Kitchener would like to stress “a crossing at the midpoint was assumed for walk shed mapping purposes only so that staff could do a baseline review. Further analysis is being conducted to determine the proposed facility type and location.” In that context, the below analysis still conveys the relative merits of different crossing locations, however the “Kitchener proposed” location can be taken as more hypothetical.

The City of Kitchener is proposing a crossing between 500 and 560 Fairway Rd S, between Swiss Chalet and Michael’s:

The City of Kitchener proposes a pedestrian crossing (in orange) of the ION tracks between 500 and 560 Fairway Rd S.

The study hasn’t ruled out a tunnel or bridge yet, but given the long ramps that would be required for a bridge, and the recently buried hydro lines underneath the tracks, it seems unlikely that there will be anything but a level pedestrian crossing, much as we have seen at several points around the University of Waterloo. 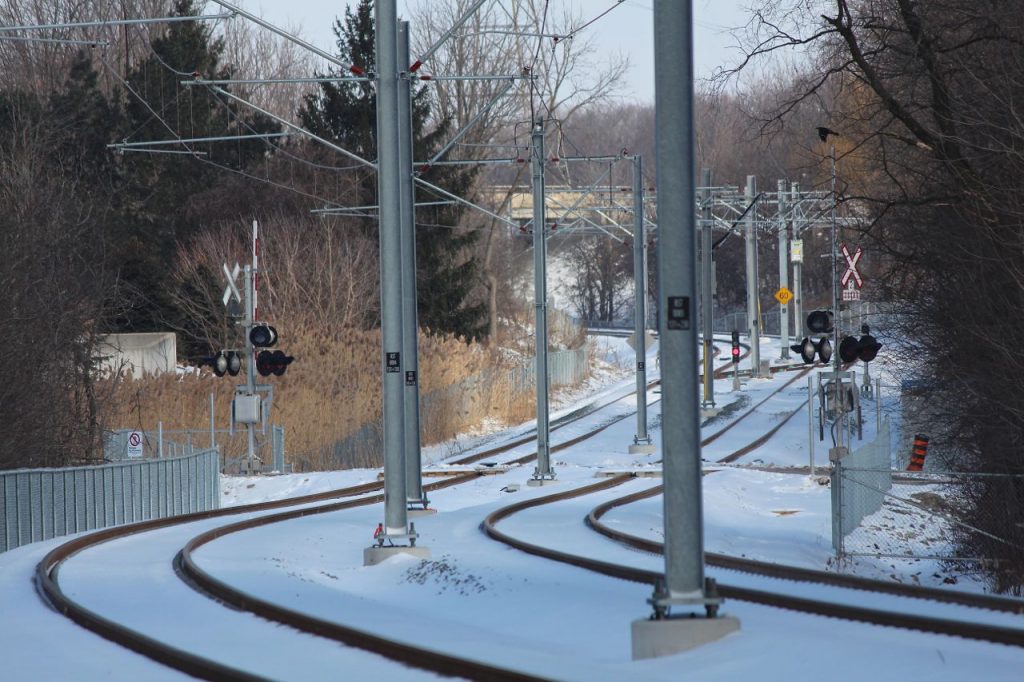 A pedestrian crossing near Albert McCormick Community Centre across a high speed section of the Waterloo Spur. A Fairway crossing might look similar to this. (Iain Hendry)

What are the tradeoffs?
There are a couple reasons working for this location:

However, those conveniences come at a cost.
The higher density housing on Traynor Ave is all to the west of the proposed crossing, and most of the retail and services on Fairway are also to the west, meaning a lot of trips will involve walking east to the crossing, and west back to the destination. To the east of the crossing are relatively low density single family homes on Balfour Cres, and a self storage facility on Fairway Ave, neither of which will be significant destinations. The apartment towers on Wilson Ave don’t even have access to the Hydro corridor, so residents there do not stand to benefit, as they can use the Wilson crossing without too much detour. 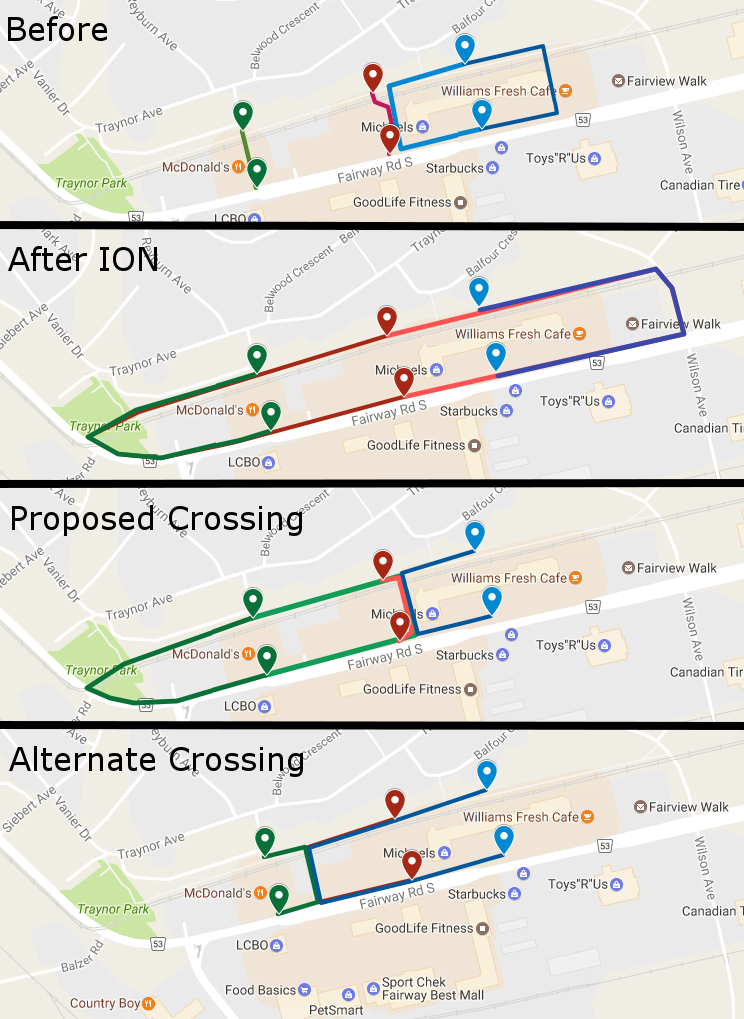 Another way to rate a proposal for a crossing is by comparing the Trip of Maximum Inconvenience. Of trips that were being made before ION, which are being the most negatively impacted? We get this by doing the following:

Here we test out three trips:

And compare them under 4 scenarios:

Walking distances across the Fairway Hydro Corridor, before ION, after ION, after the proposed crossing, and after an alternate crossing location (Text version)

We can see that without a crossing, trip 2 (red) is left with an astonishing 1.1km inconvenience. This is our Trip of Maximum Inconvenience. It stands to reason that people simply won’t make that trip anymore, if they need to walk an additional 1.1km. Trips 1 (green) and 3 (blue) also have an extra walk of 540m and 380m. Everyone has to walk a lot farther.

With the proposed crossing, trips 2 and 3 are almost back to their original distance, however trip 1 is no better off than without a crossing at all. This is our new Trip of Maximum Inconvenience, where an extra walk of 540m is now required.

The alternate crossing we propose, at 652 Fairway, has the lowest Trip of maximum Inconvenience, only causing trip 3 an additional 360m walk. The trip is 110m longer than trip 1 under the previous scenario, but the additional walk, compared to before ION construction, is much less.

When looking at population density of the area, it’s clear that most apartment buildings are in the vicinity of trip 1 and trip 2, while trip 3 is serving more single family homes. The alternate crossing we propose is also much closer to the most vital service on Fairway, the grocery store, and would mean almost no additional distance for anyone going there.

The City of Kitchener’s proposed location is certainly much better than no crossing at all. However, if it is at all possible, the neighbourhood would be better served with a crossing further to the west, where there are more people, and more existing trips are already taking place.

The City of Kitchener is still actively seeking feedback, so please look over the display boards, the comment sheet, and send your comments by Feb 24th to:
Barry Cronkite, C.E.T.
Manager of Transportation Planning
City of Kitchener
barry.cronkite@kitchener.ca

2 thoughts on “Fairway ION Crossing Proposal – How It Rates”