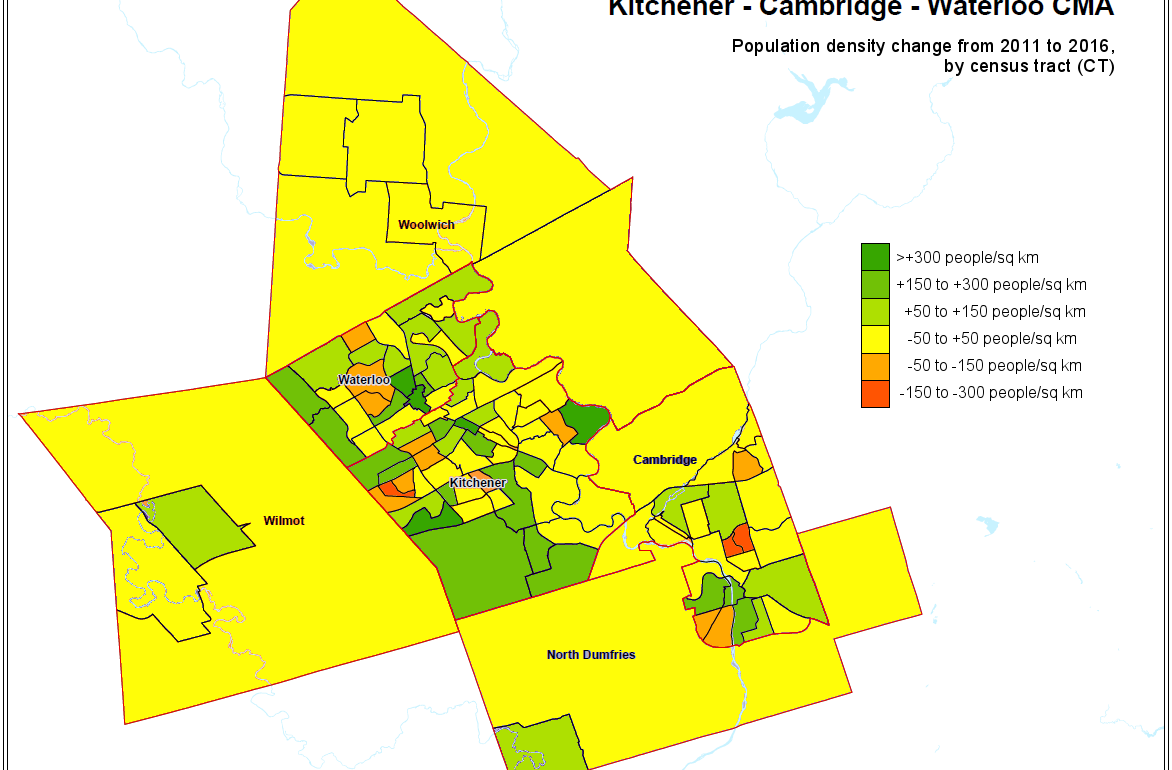 Regional staff have revealed their preliminary preferred route for ION light rail stage 2 through Cambridge. Route would use River Road extension to cross Highway 8, follow Shantz Hill to Preston, avoid the Hespeler/Pinebush intersection by using a freight bypass to cut the corner, and follow the rail corridor and Beverley instead of Water to better facilitate future connections with GO trains. Consultations will be held Feb 23, 28, and March 1, and online feedback can be shared until March 17. 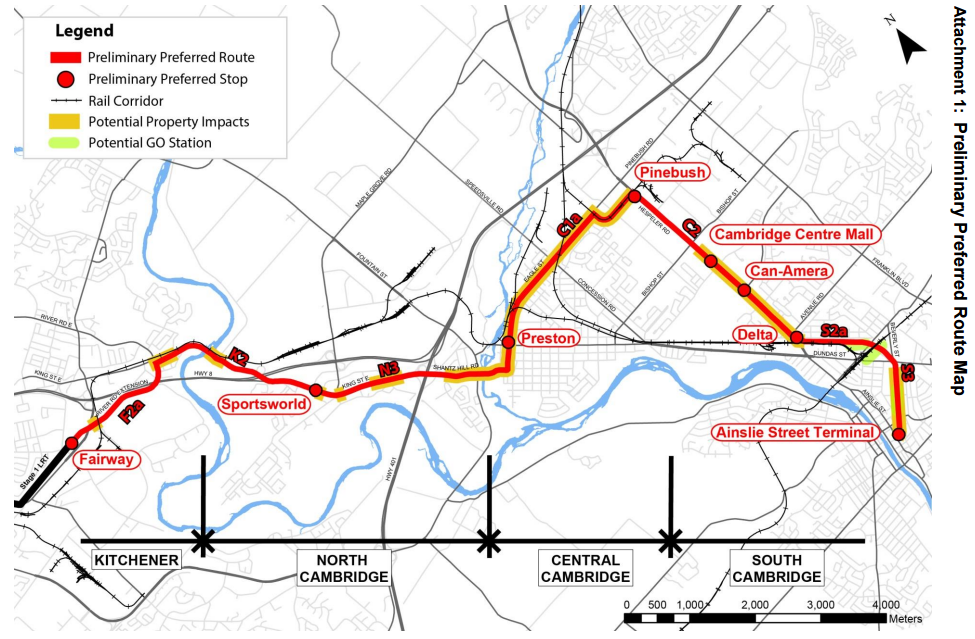 Consultation materials from the public meeting regarding re-introducing pedestrian access between the Traynor/Vanier neighbourhood and Fairway road retail amenities, separated by the ION light rail tracks, have been posted online. Feedback is due February 24.

Finally, Bombardier has applied for a court injunction against Metrolinx to prevent it from terminating its contract to provide light rail vehicles for the Eglinton Crosstown and other future GTHA rapid transit lines. Both sides now blame the other for delays. In November, when Metrolinx filed a notice of intent to terminate the order after lengthy delays, local officials stressed that disputes between Metrolinx and Bombardier would not impact our vehicle order. The first ION train, originally expected last year with the other 13 vehicles, is now due to arrive before the end of the month.

Population counts from the 2016 Census were published Wednesday, revealing a trend of growth toward urban centres. Waterloo Region grew by 5.5% from 2011-2016, with the Northdale neighbourhood more than doubling in size, thanks to increased density allowances, mixed-use zoning, and reduced parking requirements. Other figures from the long-form census, including transportation mode shares, are expected to be published late in the year.

Maps showing rates growth for the Region tend to exaggerate growth in sparsely populated areas, where small numbers look like significant rates of change. So we’ve put together our own map of the results, scaled by land area to show effective changes in density for each census tract: 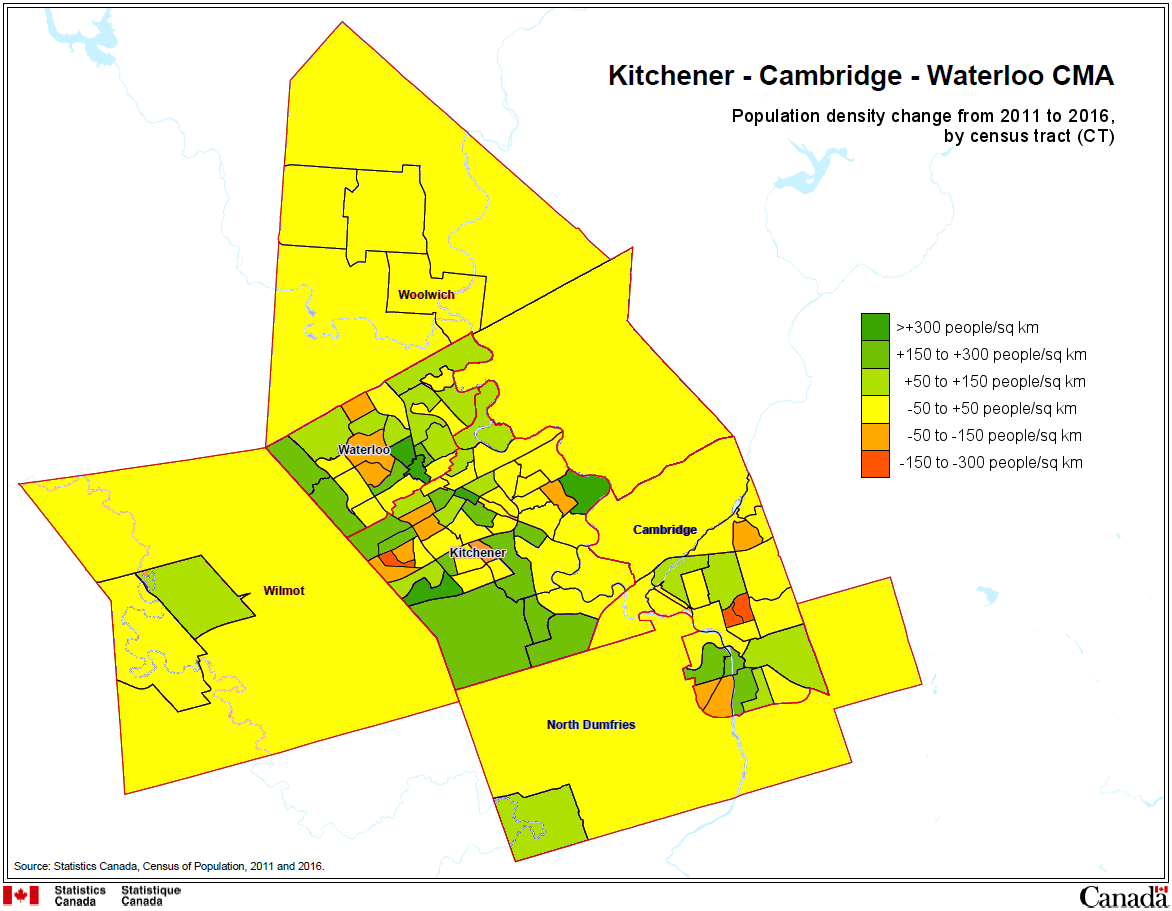 As the map shows, significant growth is seen in both Uptown Waterloo and Downtown Kitchener. Growth in census tracts along the ION light rail route was over 6%.

This summer, the Region will recruit 500-750 participants from the Transit for Reduced Incomes Program (TRIP) waiting list for a study on how low-cost transit passes improve their quality of life.

Around the GTHA, a new study reveals that GO train passengers are exposed to elevated levels of diesel exhaust, Pearson airport hopes to turn itself into a new transit hub, where light rail, bus rapid transit, and future high-speed rail on the Kitchener Line can converge, increased growth in the 905 has planners hoping to see better transit options beyond just getting to Union Station, and Raise the Hammer mulls why Hamilton’s transit ridership is in decline. (Hint: it’s service cuts and fare hikes. Sound familiar?)

Elsewhere, the mayor of Cleveland’s refusal to allow buses to connect in the city’s main square sounds somewhat reminiscent of the University of Waterloo acting as an obstacle to light rail/bus connectivity. And don’t miss Transit Center’s great post on how smart cities and transportation systems are more about good planning and policies than the latest technology.

Bill Bean on his blog Take the Lane has a post about the life and work of local and artist and entrepreneur Robert Linsley, who was killed last week while riding his bike.

The 2017 Winter Cycling Congress took place this week. Local researcher Robin Mazumder (and present KPL guest librarian) presented a keynote on how cycling infrastructure can help our mental and physical health in winter. He shared some of his thoughts on this with Canadian Cycling Magazine. Meanwhile, Torontoist looks at what Oulu, Finland is doing to keep its residents cycling through the winter.