Making sense of the census 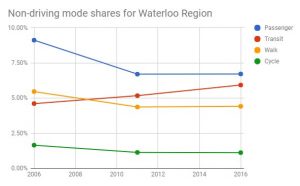 On Wednesday, the final results of the 2016 Census were released, including commute to work information. For transit in Waterloo Region, it was good news: the share of commutes to work via transit continue to grow steadily, in spite of overall GRT ridership numbers being down from a peak in 2013. This confirms Regional planners’ theory that much of the post-2013 decline in ridership came from the school boards switching to using yellow buses for high school students. The climb in transit share and relatively steady share of car trips as passengers also seems to poke holes in the theory that people are being lured out of buses by ride-hailing services like Uber.

For cycling and walking, the news wasn’t as great – these modes are used for getting to work at about the same rate as in 2011, while other cities like Toronto, Vancouver, Montreal, and Calgary made huge gains in cycling mode share. Some local media personalities questioned whether recent cycling infrastructure investments are worth it if we’ve seen little net movement in mode share over the last two decades. 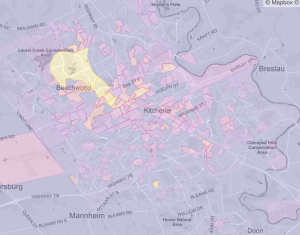 Cycling to work for Kitchener and Waterloo remains concentrated in central areas – newer suburbs may be cycling-hostile in their design and distances to places of work.

It’s worth noting two major factors at play here: the lack of a coherent all-ages-and-abilities cycling network, and suburban sprawl. Our cycling network is largely a patchwork of disconnected and all too often, poorly designed facilities. Our cities and Region maintain their own separate plans for facilities on their own roads, and new facilities have often only been added or improved as part of existing road work, rather than in a systematic way to build out a network. (On this front, the Region’s segregated bike lane pilot shows promise.) Our growing urban boundaries (only recently have we begun to develop more in our cores than at the fringes) mean that destinations are harder to reach by bike. We have been literally moving the goalposts further and further away – it’s amazing we’ve been able to keep pace at all.

The Saturday’s Record editorial remains confident that light rail will continue to boost transit ridership, even as it misunderstands some comments about parking made by TriTAG member Mike Boos to their columnist. If we want to enable more people to shift habits, we’ve got to change the incentives for driving and parking everywhere, not just in our downtowns.

Editor’s note: we should also bear in mind the census numbers we have are limited to commutes to work. In 2011, trips between home and work accounted for less than 30% of all weekday trips taken in Waterloo Region.

Despite being promised more light rail vehicles by Thanksgiving, the Region still only has possession of two cars. Bombardier will be hosting a media event this week in Kingston, where they apparently will give reporters a ride on our third train. We’re not impressed: if Bombardier wants to show the world how capable they are of building light rail vehicles, they should deliver them as promised. Thankfully, train #4 is apparently getting ready to come our way soon.

Following the provincial Tories’ plan to take over the subway system, the Toronto Board of Trade proposed merging all transit systems in the Greater Toronto and Hamilton Area, and Waterloo, into one big ‘Superlinx’ network. The idea has been dismissed by local leaders, and by researchers, planners, and commentators.

Greyhound has announced cuts to trips between Kitchener and Guelph. Sean Marshall looks at the sorry state of Ontario’s inter-city bus system.

Public consultations for the Region’s separated bike lane pilot take place December 12 and 14. The Region appears to be favouring the area enclosed by the Waterloop trail system as the initial pilot, which includes parts of Uptown, Northdale, Laurier, and the east campus of UW. But with the Region’s scoring system showing this neighbourhood as neck-and-neck with downtown Kitchener, we have to ask, why not do both?

The latest local cycling facility screw-up takes place on Glasgow in Kitchener, where speed bumps have been placed over the bike lanes. We get that the city wants to remove the incentive for cars to drive into the bike lane to avoid the speed bump, but there are better ways to achieve this. Meanwhile in Waterloo, Uptown King Street has reopened to fanfare, but the much-anticipated protected bike lanes have been hogged by drivers and their parked cars.

Kitchener is planning to spend $10 million on a new downtown parking garage for roughly 500 cars in the next decade. That’s $3.9 million more than it plans on spending on its Cycling Master Plan over the course of more than 20 years.