Yesterday, a 12 year old was struck by a transport truck while cycling through the intersection of Hespeler and Can-Amera Parkway. (A GoFundMe page has been set up by a family friend to assist the family as he recovers.) We don’t have many details at this point what happened, although police suggest the child may have been riding on the sidewalk before entering the roadway.

There is a multi-use pathway along the south side of Can-Amera. We don’t know if the victim had been using this path, or had intended to use it. But the way in which this path meets the intersection should raise some uncomfortable questions among our local traffic engineers. It, like many similar paths throughout the Region, lacks a proper way to cross the intersection on a bike.

A recent trend in road reconstruction is to build multi-use pathways on arterial roads instead of bike lanes. This is mostly reasonable.  The speed and volume of traffic make painted bike lanes fairly useless – complete separation is needed. There are few driveway conflicts and few pedestrians to avoid along the blank fences. The trouble comes when one road meets another.

People cycling these pathways end up having to choose between two options: dismount and walk, or bike through the crosswalk. Ontario Traffic Manual Book 18, the province’s guidelines to municipalities on how to build cycling infrastructure, is quite clear that expecting dismounting is unreasonable:

Most people cycling will opt to ride through the crosswalk in this case. But a good fraction of cycling-related collisions occur in crosswalks, because motorists aren’t looking for bikes there. Turning vehicles don’t tend to mix well with pedestrians as it is, and bikes are faster-moving than walking, so it requires more situational awareness on the part of drivers to look out for them.

If an engineer designs an intersection that meets a multi-use path, where cycling is expected, and only applies crosswalks as a way across, they are designing a system that will harm people who bike.

Can anything be done though to accommodate people cycling along trails through intersections? Yes! The Dutch, for example, have been building separated paths for years, and have a wealth of design knowledge for crossings. But we also have more North American examples. And Book 18 provides transportation planners and engineers the tools they need to implement them, by way of specially marked “cross-rides” for bike crossings and dedicated bicycle signals.

Cross-rides are marked differently than crosswalks to give indication to drivers that bikes are expected there. They’re sometimes green, have bike logos, or are marked with squares instead of two lines or zebra stripes. Signals separate the times when bikes and pedestrian can cross from when vehicles can make turns. When applied appropriately, these measures can reduce potential conflicts between cars and vulnerable road users.

We are seeing some small movements in the right direction – the Uptown  King Street improvements under construction should include intersection features that will connect protected bike lanes with future pathways on Bridgeport. But in other places, the same negligence towards people cycling continues: the Iron Horse and Laurel Trails meet at Erb and Caroline with only a crosswalk, as do the new pathways along Fischer-Hallman.

These are more tragedies waiting to happen. 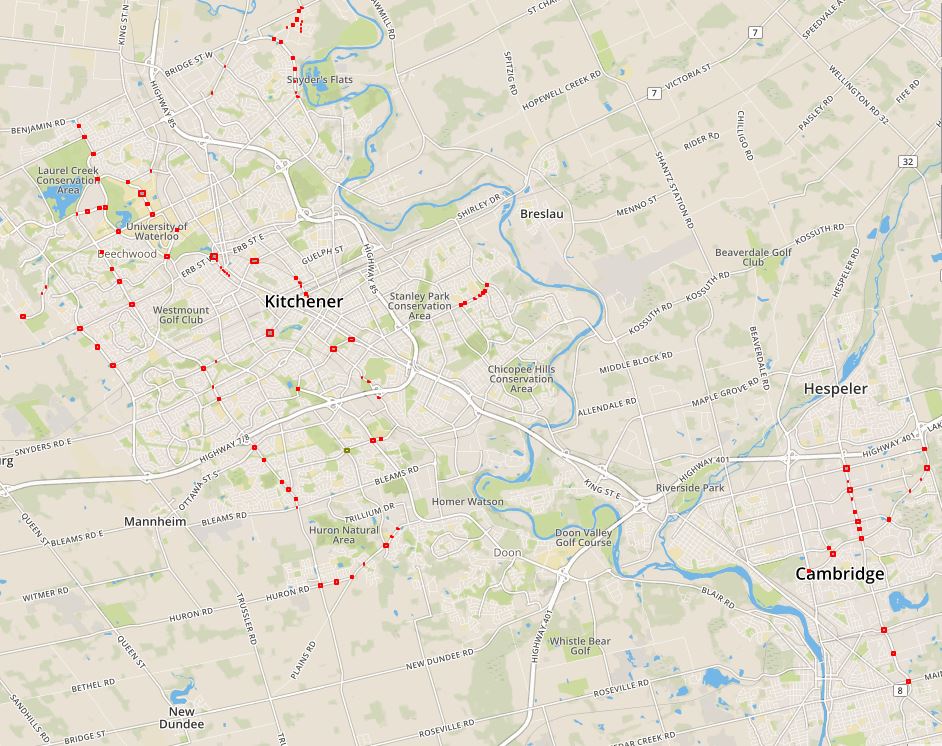 Intersections where multi-use pathways meet or cross close by without crossing infrastructure for bikes.