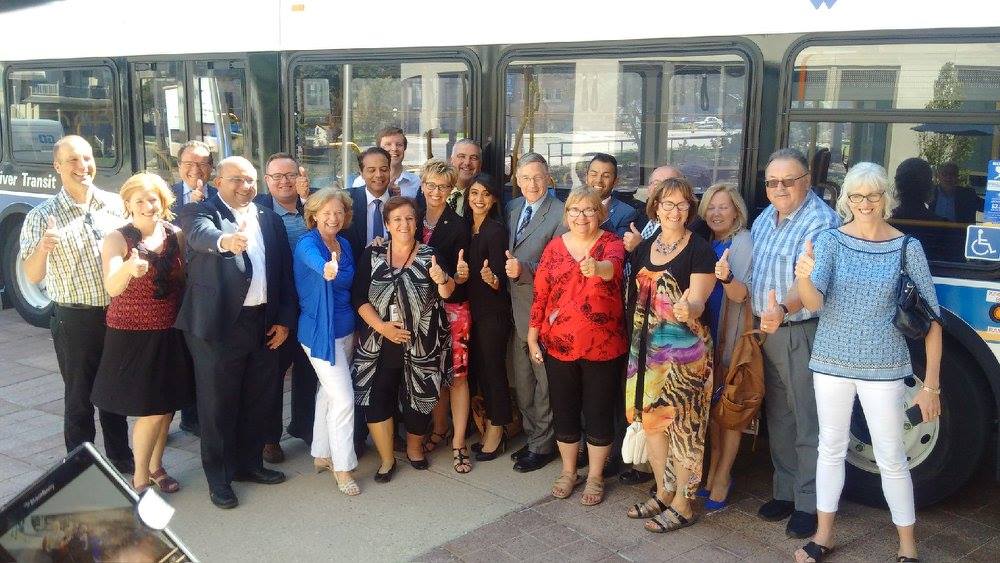 One Tuesday, the federal and provincial governments announced nearly $23 million in funding for transit projects in Waterloo Region. About half of the money will go to vehicle replacements and upgrades, while the rest will be spent on iXpress and ION connection stations (including a transit plaza at UW), and a new bus facility on Northfield Drive. (Here’s the full listing of projects in Ontario municipalities.) There’s also about $12 million left in Waterloo Region’s share of transit funding from the feds, with potential projects it could fund to be presented to Regional Council this fall.

On top of this, new development charge rules could save residents $161 million in transit-related costs over the next ten years. This could have a significant impact come budget time.

Schedules for new GO service were announced this week. Starting in September, four weekday bus trips will run in the morning from Ainslie Street Terminal and Hespeler/Pinebush to Milton GO, with eight return bus trips in the afternoon and evening. Two new weekday morning train trips will start from Kitchener, including one ‘express’ route that skips stops between Bramalea and Union, saving about 15 minutes. In addition, express bus service will run hourly on weekdays between Kitchener and Bramalea, to connect with trains and buses there. (No weekends yet, unfortunately.) The daily bus trip from UW to the Milton line will be discontinued.

Canadian Cycling Magazine looks at the cycling projects in Toronto and Ottawa covered in this week’s federal funding announcement. With $12 million remaining for the Region, will we see cycling projects funded federally here as well?

In Toronto, a cab driver deliberately struck a bicycle courier, but was caught on video. Following internet outrage, the driver has been charged with dangerous operation of a vehicle and assault with a weapon.

Here, I made a GIF on how well sharrows work pic.twitter.com/3M7WeKjuPa

Elsewhere, Tom Babin of Shifter writes about how a focus on the number of kilometres of bike lanes built may be leaving behind significant gaps in your city’s cycling network. Fast Company considers technology police can use to enforce 1 m passing laws, and how it might be used to improve road designs. And Ryan McGreal of Raise the Hammer reflects on just how lucky Hamilton is to have SoBi bike share.

It’s been a brutal week for traffic violence in Waterloo Region and the surrounding area. Casualties include a toddler struck and killed by a van,  a passenger injured, a horse pulling a buggy killed and three injured, a driver killed trying to avoid an oncoming car, and six injured in a three-vehicle crash, and two motorcyclists killed in separate incidents.

Around the web, Joe Cortright writes at City Observatory about the connection between cheaper gas prices and crash rates, while StreetsBlog  covers Portland’s pilot project to use factors  like number of pedestrians and how closely cars and bikes interact when establishing speed limits, (rather than merely on how fast most drivers already travel on the road) in an effort to reduce collisions.

The consensus in Cambridge appears to be a willingness to wait a bit longer to build a sports multiplex, if it means it will be centrally located and accessible via transit. On Engage Cambridge, more than 90% say it should be accessible by transit, 78% say it should be reachable via active transportation, and more than half say location is more important than cost.

Meanwhile, Urban Strategies (who have helped with the Central Transit Corridor Community Building Strategy and both Kitchener and Waterloo’s light rail station area planning) blogs about Ontario’s Climate Change Action Plan, and what impact that will have on the Growth Plan. And CityMetric encourages other cities to implement a parking levy like Nottingham did to reduce congestion and help pay for transit.

A Kingston and L.A.-based car-pooling service, OpenRide, is planning to launch service between Toronto and Kingston this fall. The company looks forward to the possibility of new MTO regulations allowing inter-city ride-sharing.

CityLab reports on jurisdictions requiring ride-hailing apps like Uber and Lyft to compensate taxi companies, as well as partnerships between taxis and Uber, and efforts to unionize drivers. Meanwhile, Uber has lost over $1 billion in the first half of 2016.

What do you think?

Has our Week In Review series been useful to you? Got ideas, tips, or suggestions to make it better? Give us a shout at hello@tritag.ca