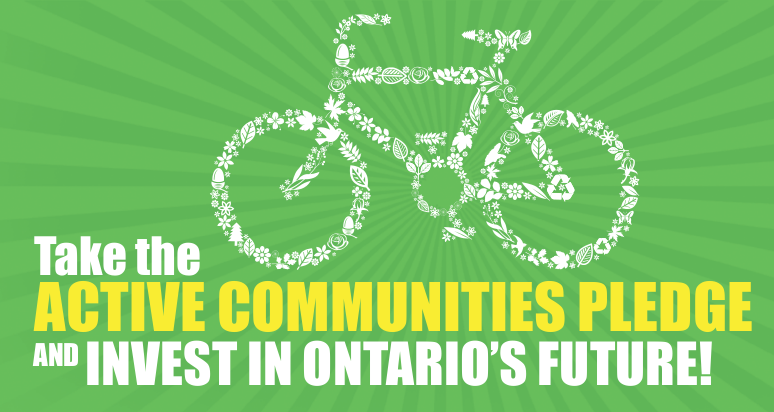 In addition to having the most council and mayoral candidates supporting the pledge, the Region also boasts the first two school board trustee candidates to support safer walking and cycling to school.

“Waterloo Region has recognized and embraced the importance of active transportation, and has shown leadership and dedication to creating more walkable, bikeable and livable communities. The benefits of this approach are becoming widely recognized, a fact that is reflected in the broad support for the Active Communities Pledge amongst candidates for municipal and regional office in the upcoming election.” said Justin Jones, Manager of the Bicycle Friendly Communities program with Share the Road. “At Share the Road we’re pleased to see so many champions for active transportation emerging in the Waterloo Region, and look forward to working with whichever candidates are elected to ensure that all communities in Waterloo Region continue to be provincial leaders in creating healthier, more prosperous and better connected communities.”

The Active Communities Pledge campaign invites all municipal candidates to:

Cycling and active transportation advocates in Waterloo Region and across Ontario are emphasizing that the Active Communities Pledge is about boosting awareness of the issues, not pressuring politicians.

“Candidates and voters know that neighbourhoods and communities that are walkable and bikeable offer a better quality of life. They reduce traffic congestion and cut pollution, boost local retail spend, draw in new tourist dollars, promote a healthy lifestyle for adults and children, and help build a friendlier, more cohesive community,” said Mike Boos, a member of the Tri-cities Transport Action Group (TriTAG). “Active transportation will also be vital to the success of ION rapid transit. Moreover, communities that have focused on building walkable, bikeable places have proven that the long-term infrastructure costs associated with active transportation are much lower than auto-dependent infrastructure, resulting in a lower tax burden for our residents in the long run. This campaign is about increasing public awareness, building voter support, and encouraging our local politicians to make a commitment to bike friendly policies that will benefit our entire community.”

The cities of Waterloo and Kitchener have already been recognized for supporting bicycling and active transportation through Silver Bicycle Friendly Community designations in 2014.

The Share the Road Coalition, which is sponsoring the province-wide Active Communities Pledge Campaign, released a province-wide poll (2014) showing that:

For a full list of candidates who have signed the pledge go to: http://www.activecommunitiespledge.ca/see-who-signed.php

The Tri-cities Transport Action Group (TriTAG) is a local grassroots organization advocating for the ability to walk, bike, or take transit in Waterloo Region with dignity. In addition to supporting the Active Communities Pledge, TriTAG is preparing a survey on walking, bicycling, and transit issues for local municipal election candidates, the responses of which will be published in October.

One thought on “Waterloo Region leads in Active Communities Pledge”