TriTAG is concerned by apparently disingenuous tactics being used in an attempt to derail plans for Waterloo Region’s first segregated bike lanes on Manitou Drive.

In August, the Regional Planning and Works Committee unanimously approved the preferred design option for the Manitou Drive improvements, which would include sidewalks and segregated bike lanes on both sides of the road. The segregated bike lanes would provide continuity between planned bike lanes to the north on Manitou Drive between Bleams and Fairway, and with bike lanes to the south on Doon Village Road. They would also help to form an on-road cycling route between the Doon Village neighbourhood, the Trans-Canada Trail, and ION rapid transit. Presently absent sidewalks would provide safe walking space and would be essential to expanding transit service to the area. Final approval of plans for Manitou Drive is scheduled for the Regional Council meeting on September 17, 2014.

Flyers have recently appeared in the Doon Village neighbourhood, claiming that the committee-approved bike lanes would be “very dangerous” and “cause fatalities.” As an alternative, they propose no sidewalks and one multi-use trail on the east side of the road, to be shared by both pedestrians and cyclists.  These flyers, which call on residents to contact Regional Council members, contain several errors and exaggerations, as we will outline below.

The flyers’ cross-section illustrations (above) would have you believe that bicyclists would be right alongside fast moving trucks, which would indeed be a serious concern. But when you compare the illustration of the segregated lanes to the actual design (below), you realize they’ve taken quite a few liberties. The vehicle lanes, and indeed the vehicles themselves, have all been stretched in the image so they appear to be brushing up against the bike lanes. (Interesting how the vehicles and lanes don’t appear to be as wide in the proposed alternative cross-section!) 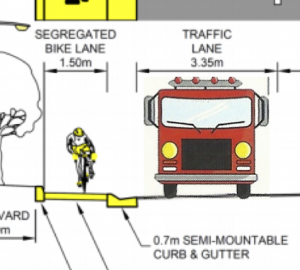 It’s also worth noting that even a vehicle as wide as a fire truck would not come close to bicyclists. We’ve attempted to render a fire truck to-scale next to a segregated bike lane (left).

The inclusion of a school bus in the cross-sections is a nice touch. The image of a school bus invokes fears for the safety of schoolchildren, who wouldn’t be on this street anyways – Manitou Drive is in an industrial area with no homes or schools along it.

The flyers call an east-side multi-use trail a “safer alternative.” The Planning and Works Committee report finds that a multi-use trail would not be safer, due to the number of driveways the trail would need to cross, creating numerous conflict points. Consequently, Active Transportation Advisory Committee has endorsed this option as its preferred alternative. The flyers also claim that the bike lanes are “more costly to install and maintain, which will increase taxes.” Installation costs for the road work costs are already covered in the Ten Year Transportation Capital Program. The report does note that bicycling facilities will lead to additional maintenance needs, but it is not clear that these costs would be greater than those spent maintaining a multi-use trail.

The flyers do not state their source, so we cannot say for certain where they originated from. However, the proposed trail design and claims that segregated lanes pose danger to cyclists echo those of a handful of business owners along the west side of Manitou Drive who have organized a petition against the sidewalks and bike lanes. These businesses do not want to have to maintain sidewalks in winter (in spite of clear desire lines for pedestrian infrastructure). Additionally, both Google Maps and aerial photography reveal that some of these businesses are accustomed to using the space the sidewalk and bike lanes would occupy to showcase vehicles. One must also wonder why this alleged concern is only being expressed now for pedestrians and bicycle users, and not before over existing Manitou Drive conditions?

TriTAG is concerned that not only is misinformation being spread about the proposed segregated bike lanes and sidewalks, but also that it might have been disseminated in order to serve private interests, for reasons entirely unrelated to public safety.

The Planning and Works Committee made the right decision in August. Let’s hope this decision isn’t derailed by dirty tricks.

5 thoughts on “Fear-mongering and dirty tricks on Manitou Drive”