Below is the TriTAG statement Duncan Clemens presented tonight to Waterloo City Council, prior to its deliberation about the Region’s preferred approach to LRT routing in Uptown Waterloo. We will present a similar one tomorrow at Waterloo Region’s Planning & Works Committee meeting.

Thank you for the opportunity to speak with you tonight about what has been a lengthy process. We congratulate other members of the community who have also come tonight to add their voice.

The Tri-Cities Transport Action Group is pleased that the Region of Waterloo has taken the time necessary to carefully explain the Uptown Waterloo routing challenges to the public in its September 27 meeting. This process of engagement was good for the community, and we hope to see more of it as the detailed system design commences. Doing this kind of consultation helps the public take ownership of what will in 2018 become their rapid transit system.

The preferred option helps to address new development in the quickly-growing area of Waterloo surrounded by the new station at King and Allen. In addition, moving one of the two platforms of the station at Willis Way next to the Public Square encourages people to use Waterloo’s main public space and its surroundings. The use of the spur line and the station platform adjacent to the square will allow for the preservation of surface parking on King, traffic flow on Erb, and is truly a best practice in placemaking. The routing will enhance a square that is already a resounding success for the City of Waterloo.

Some may not be terribly happy with the preferred alternative because they live on Caroline Street and see no reason for transit to be taking what they perceive to be a back street through the core of the city. Athough the utility and cost constraints on the system may not provide a satisfactory resolution for these residents, it is a very positive outcome to see their neighbourhood better served by rapid transit with the addition of the Allen Street station in the recommended alternative. Doing so goes a long way to making LRT a relevant and appropriate option for this part of your city.

Usually, TriTAG becomes concerned when transit stations are placed at the back doors of neighbourhoods, implying a second-class status to transit users. It has also become concerned when a station is placed mid-block between two crosstown streets, kneecapping planned crosstown iXpress routes with lengthy (and costly) mid-run layovers before said routes are even launched. But in this case, TriTAG is concerned that a platform for a major station is split into two parts which are not visible from one another, thus interfering with effective wayfinding.

Waterloo – especially through C.I.G.I. and the Perimeter Institute – attracts academic talent from around the world. So if one arrives in Uptown Waterloo via LRT, is it apparent where one would wait for the return train? With the southbound Uptown platform at Willis Way and Caroline, concealed from the public square platform, we think not.

We humbly submit that staff and Council consider the impact of moving the southbound Uptown platform from Willis Way to Erb and Caroline, and that the City of Waterloo and the Region of Waterloo work together to redesign the Erb and Caroline intersection in a manner sensitive to the needs of both customers of the LRT system and users of the Iron Horse and Laurel Trails, without undue impacts on other vehicular movement. 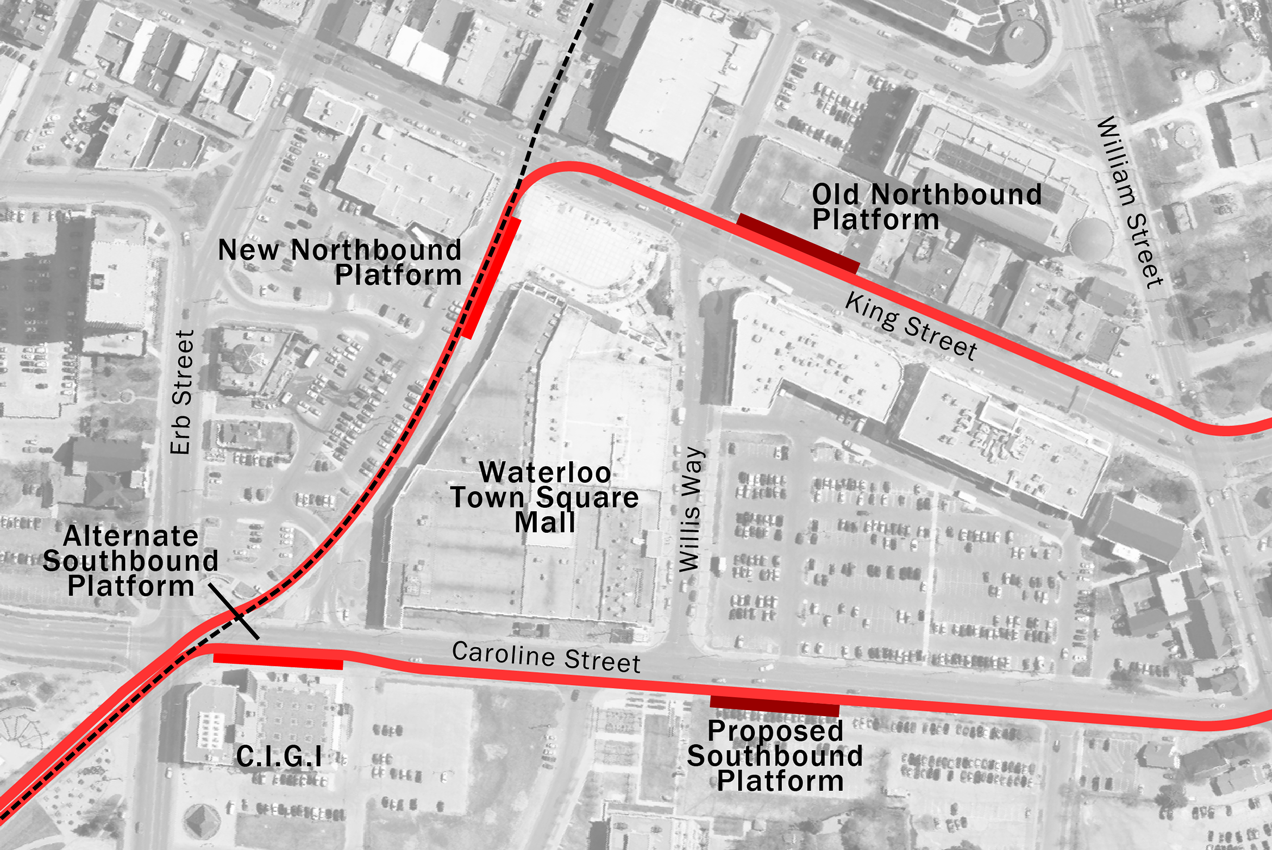 Illustration of our alternative southbound LRT station at Caroline / Erb instead of Caroline / Willis. (Duncan Clemens)

Together, we can make using transit in the Region of Waterloo both intuitive and gratifying if we build it with wayfinding and placemaking in mind. We have listed at the end of this letter a set of major destinations for which access to LRT would be significant. Of the destinations which would benefit from a southbound platform at Erb Street instead of Willis Way, all are institutions unique to our local community.

For more information, feel free to contact us at hello@tritag.ca