Last week’s Planning and Works agenda (PDF) had an update on the Rapid Transit project, and the RT Team has also released a summary of public comments from the September 27 Uptown LRT planning workshop held at Knox Presbyterian Church. Kudos to the Rapid Transit team for attempting to organize what was discussed by 24 distinct groups over the course of three one-hour meetings into a very big, rather unwieldy set of tables.

This meeting was good for the community. LRT through Uptown Waterloo is a pretty contentious issue, because everyone is scared of how it will change the landscape. This meeting did a good job of explaining why the Rapid Transit team selected its preferred option — but didn’t present all of the alternatives available, just the ones being considered by the Rapid Transit team.

With that in mind, TriTAG has produced two additional alternatives for Uptown Waterloo LRT routing that would have no impact to the Waterloo Public Square ice rink, wouldn’t require any buildings to be destroyed, would impact road traffic less than many of the presented options, and would improve the user experience of transit customers in Uptown Waterloo.

The first alternative uses the existing split-routing model through Uptown, but without splitting the platforms too far from one another, and places an additional station in Uptown Waterloo.

The benefit to this option is that Uptown gets two stations: one at Allen to serve massive condominium developments around the Allen-Union node, and one at Caroline to serve the institutional development happening around the Erb/Caroline intersection, as well as crosstown buses at the current heritage railway station.

The drawback to this option is that its station locations don’t immediately draw customers into the existing King St. business corridor. Customers would have the option of being dropped off or picked up at the fringes of Uptown Waterloo. Also, the folks living at Catalina Homes don’t relish the idea of the lower part of Caroline street becoming a major people-moving corridor.

The second alternative uses the east side of King Street, and would turn across the existing sidewalk in front of the Rude Native Bistro to a station placed beside the existing mall, bordering the edge of the Waterloo Public Square. 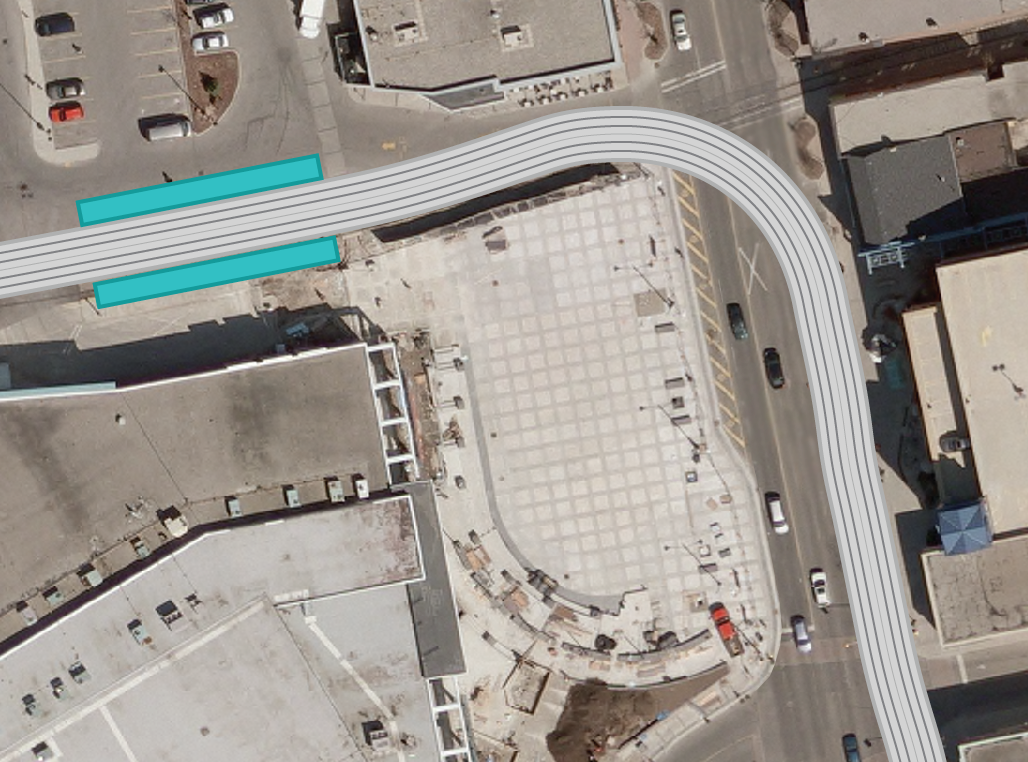 The benefits to this alternative are that LRT customers are delivered right into the center of most Uptown Waterloo destinations – they have easy access to King St. businesses, a short walk to the Erb and Caroline institutional corner, and are right next to whatever festival has shut down Willis Way, the public square, and King Street from the rail spur to Bridgeport.

Meanwhile, car users are still able to use Bridgeport, Caroline, Regina, and Erb unimpeded by LRT to access parking lots and structures that complement the excellent transit access, and businesses on the east side of King Street get a little bit of extra sidewalk space, and the ability to convert what are now parking spaces into patios or sidewalk displays, increasing revenue-producing floor space.

The drawbacks to this alternative? There’s a bit of a gulf between Uptown Waterloo and the Hospital station, and oh — right, those ten on-street parking spaces on the east side of King Street. Let me tell you a little bit about that.

I have my driver’s license. When I want a car, I rent one: in fact, I just spent the weekend enjoying a particularly sporty machine. I drive both inside the city and outside of it. I visit Uptown Waterloo on foot, by bicycle, using transit, and in a car, and I do so not infrequently: It’s where I go when I want to visit a conventional grocery store.

I had the opportunity to chat with a public figure from the City of Waterloo at the September 27 meeting, and when I asked how they thought everyone got to Uptown Waterloo, their response was “well they drive, of course.” This same individual would prefer that LRT run exclusively on Caroline.

See, here’s the problem: When I drive to Uptown Waterloo, I don’t use King Street, nor do I dare play in traffic to try and find, and then use, one of its on-street parking spaces. Using my particular route from the south, I take Weber to Bridgeport, and access the large parking lots off Caroline.

But suppose I’m coming from the north? Same deal: I stay off King as much as I can, to get to those abundant parking spots on Caroline. East? Bridgeport to Caroline, again. West? Wouldn’t even cross King: Hundreds of parking spaces in lots off Caroline, a handful on King Street. Starting to see a pattern here? The best way to access parking in Uptown Waterloo is not by driving on King Street.

Having LRT go up the east side of King Street in Uptown Waterloo isn’t just a win for transit passengers, and businesses who wouldn’t mind more sidewalk space: it would keep Caroline (and Erb) unmolested for those who need to access the much more abundant parking found in the lots that are currently accessed from Caroline Street. It makes sense for everyone.

Please consider expressing your support for one of these initiatives, before Regional Council makes its final decision in November and it’s too late. You can send an e-mail by clicking here.

12 thoughts on “Are The Best LRT Options for Uptown Waterloo the Ones Not Being Considered?”