The Region sits on the cusp of transformative change when it comes to cycling infrastructure. At Tuesday’s Planning and Works Committee meeting, regional councillors will be asked to approve two reports regarding all-ages-and-abilities cycling infrastructure around Uptown and the universities. Your voice is essential in ensuring councillors vote to deliver on these projects.

The Uptown King Street bike lanes, which TriTAG played a key role in promoting, have in their implementation received a fair amount of criticism. Justifiably so. The mountable roll-curbs have allowed easy access to illegally parked or stopped vehicles, and enforcement efforts by the City of Waterloo have been pitiful. 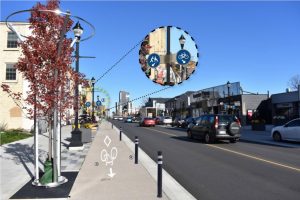 Proposed fixes to the Uptown bike lanes include flex bollards and better signage.

The good news is that staff have listened to public feedback and are now recommending flex bollards for subsequent phases of the streetscape project, as well as retrofitting the southbound bike lane and frequent encroachment points on the northbound lane with bollards as well. Better signage to encourage pedestrians to avoid meandering into the lanes is also proposed.

The long-awaited protected bike lane pilot project is also on Tuesday’s agenda. Modelled after cycling network pilots in Calgary and Edmonton, which saw huge surges in cycling trips after they were built, the pilot would focus on both protected infrastructure and rapidly forming a cohesive network of routes in a high-demand area. Existing road space on King Street, Erb Street, University Ave, and Columbia Street around Uptown and Northdale would be reallocated to provide bike lanes with buffers and flex bollards. Precast curbs would also be used on King, Erb, and University. 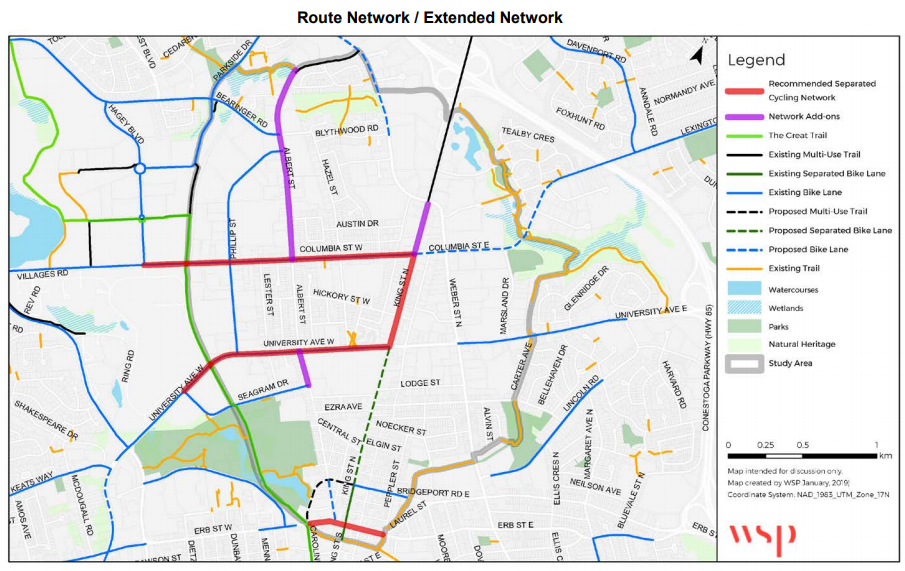 What’s remarkable about the pilot is the degree to which Regional transportation staff are willing to consider narrowing or removing motorized vehicle lanes to facilitate the project. Until now, challenges to the Region’s road dimensions dogmatism (unless it’s to reduce the width of a bike lane) have been virtually non-existent. However, narrower travel lanes lead to safer speeds and shorter crossing distances for pedestrians, which reduces the number and severity of collisions with vulnerable road users. Staff are also willing to accept some impacts to car travel times at intersections where they plan to add two-stage bike boxes for making safe turns, acknowledging that motorist habits and routes will change in response. These changes in attitudes are most welcome!

It is disappointing that the proposed network is somewhat scaled back from an earlier vision staff were considering last year. These reductions are now listed on the map as “add-on extensions.” Dithering and delays (the pilot was supposed to have been built in 2018) have cost the Region support from a provincial government no longer interested in funding cycling infrastructure. The Albert Street extensions fall under City of Waterloo jurisdiction (staff hope to coordinate with the city to grow the pilot on their end). The King Street extension north of Columbia, which would provide vital connectivity to the multi-use paths between Weber and Conestoga Mall, is dismissed because staff value higher motorized traffic volumes over cycling along that corridor.

Still, the pilot represents an important shift in infrastructure development in the Region. Indeed, staff are hoping to repeat the pilot in Kitchener and Cambridge, so this project is a big first step towards a coherent minimum grid of protected cycling routes.

The more councillors hear residents celebrating the pilot and the Uptown improvements, the more they’ll be likely to vote for them. We’d encourage you to take a few minutes to write to your councillors urging them to support these two projects. The future of cycling in Waterloo Region depends on them.