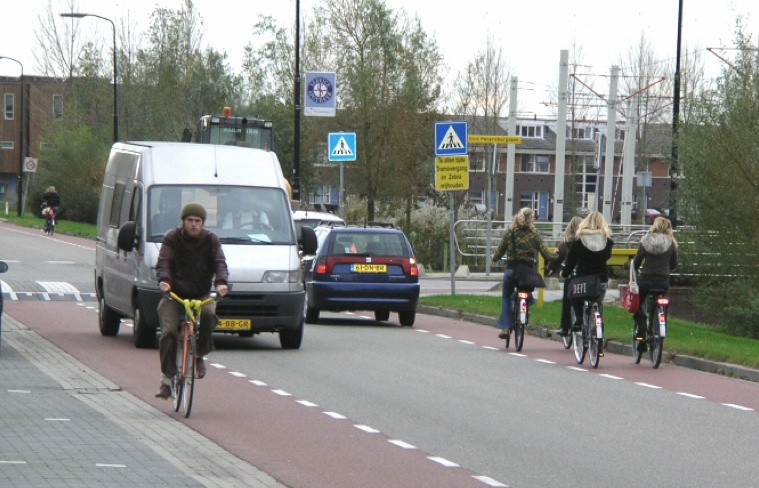 Krug Street is an important piece of Kitchener’s Cycling Master Plan. It’s one of the precious few roads that crosses the Conestoga Parkway that doesn’t have dangerous on or off ramps, and doesn’t carry heavy traffic. Portions are currently being reconstructed, and with that work comes the opportunity to integrate cycling facilities on the street.

However, Krug can be quite narrow in places, as little as 8 m in some blocks, which doesn’t have room for full bike lanes and car lanes wide enough for buses to pass. Widening the roadway has been ruled out, as this would remove significant tree cover which improves the safety and walkability of the street.

The solution city staff are recommending is to put “advisory bike lanes” on the narrower portions. Advisory lanes would have the full width of bike lanes, but would be dashed instead of solid lines. The middle section of the road would be narrower than two conventional traffic lanes, with no centre line. Motorists would be expected to use the middle section, except when approaching an oncoming vehicle, at which point they would be allowed to pull into the advisory lanes, yielding to people cycling in them. It’s certainly not an ideal situation, but it’s a design that has been used commonly in the Netherlands, and more recently, in Ottawa and Minneapolis. It’s also mostly limited to the narrowest sections, with solid line bike lanes elsewhere. There are a few other concerns with the proposal that we’d like to see corrected – mandatory buffers are missing between parking spaces and bike lanes, some sections have excessively wide lanes that will induce speeding, and most egregiously, advisory lanes are proposed between East and Dumfries to shoehorn in extra parking spaces. But it’s greater separation between cars and bikes than what sharrows or just a signed route would provide, and has some continuity rather than making the bike lanes disappear entirely where they wouldn’t otherwise fit.

And since there is likely going to be some pushback over the loss of some existing (and sparsely used) parking, it’s important that constructive feedback be received by staff and local councillors. Please take a few minutes to send some comments by Friday. (More details of the proposed designs here.)

7 thoughts on “Krug Street: how to make the most of limited space”