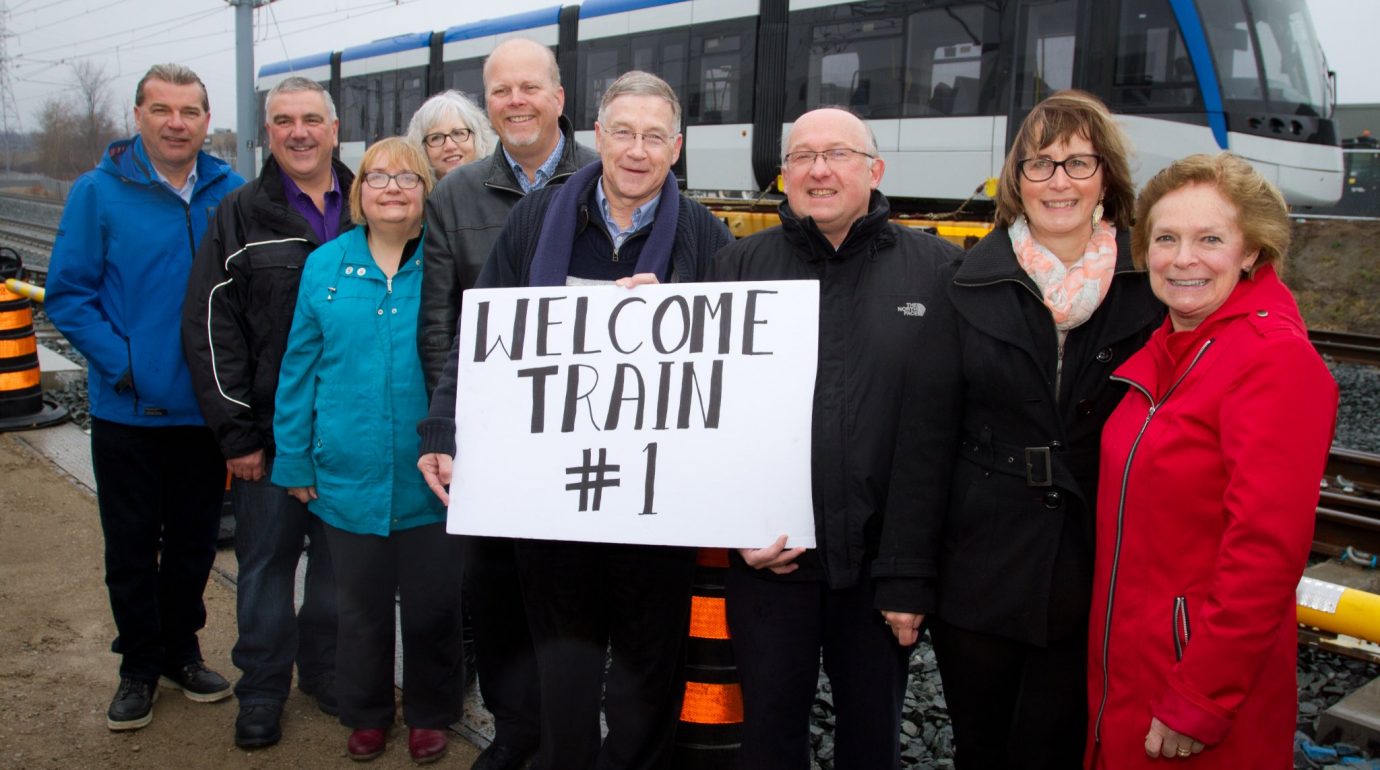 The first ION light rail vehicle arrived in Waterloo Friday. Kitchener Post columnist James Bow says it’s worth getting excited about. The public is invited to view the vehicle at an open house on April 8.

The LRV will be tested and integrated with the ION signalling systems, with testing along the Waterloo Spur corridor beginning in May. Meanwhile, the dispute over how ready the Flexity Freedom is continues between Metrolinx and Bombardier. The train manufacturer invited the media this week to its Millhaven facility to see the next ION vehicles in production. Bombardier is promising all 14 light rail vehicles by the end of the year.

Caleb is all of us.

We’ve written in the past about the decline in GRT ridership in terms of local factors, but transit use across most cities in North America has fallen as well – except in communities like Houston and Seattle that have redesigned their networks around frequency and are increasing their investments in transit. Other cities like Columbus and Austin are looking to follow suit, with quick network overhauls. (GRT is making progress towards this – 4 out of 6 of its “New Directions:” integration with ION, more express routes, greater frequency, and more direct routes help with that – but at too slow a pace to overcome the challenges to ridership.)

The city of Everett, Massachusetts has successfully piloted a “pop-up bus lane” with traffic cones, allowing buses to use space formerly occupied by parking along a main street. The pilot saved time for both bus and car commuters, and is now being made permanent with painted bus lanes. The city is now looking to expand the pilot to other streets.

The National Association of City Transportation Officials and TransitCenter have published a new whitepaper encouraging transit agencies to speed up buses by having all-door boarding for buses and off-board fare payments. ION light rail vehicles will have all-door boarding, and both ION trains and buses will have off-board payment systems on platforms.

Land use and transportation

Planning and Works Committee chair Tom Galloway tells Exchange Magazine that ION light rail’s primary purpose isn’t transportation, it’s intensification. “The LRT is a planning tool that happens to move people. The moving of people is not unimportant, but the more important piece is the intensification, the piece that drives investment in both the residential and the commercial areas, and deals with recruitment and retention of talent.” He notes that the project has changed developers’ focus from suburban sprawl to growth around the cores.

That intensification is a good thing, because a recent study has identified land use mix, density, and proximity to transit as some of the most important factors determining how likely residents are to drive.

This year, Kitchener will be paving the Balzer Creek trail, connecting gaps in a 1.2 km system that will link two communities on either side of Homer Watson with a trail underpass.

Another study from Toronto, this time focusing on the Parkdale community, shows that people cycling to shops make better customers than those driving, and that removing parking actually made businesses more attractive. This is good news for Uptown Waterloo, which will see construction of protected bike lanes begin this summer. Meanwhile, preliminary numbers for the Bloor bike lane pilot have been released, showing the number of people cycling up 36%, (of which, 25% are new cyclists), with some motorist delays. North of Toronto, the County of Haliburton is showing that complete streets can work in rural communities as well as cities.

Automotive news website Driving has discovered the truth about induced demand – that bigger roads and highways can’t cut congestion, but that disincentives like tolls work. DNA Magazine tackles the fallacy that more driving means a healthier economy, when in reality the more compact cities are, the more efficient and healthy they become.

The Globe and Mail explores the (modest) hope that autonomous vehicles programmed to avoid collisions at all costs could give pedestrians back control of the streets, while Doggerel debates the potential impacts autonomous vehicles may have on cities. Planning firm IBI group has published a new report on these potential impacts, and what cities can do about them. Meanwhile, Ford has announced that it will only sell fully-autonomous cars, not partially-autonomous ones, as they found their test drivers kept falling asleep at the wheel for lack of things to do.

“Technology alone will not provide us with miracle solutions. If we really want to achieve sustainable, efficient, fair, safe, and environmentally sensible ways of moving both things and ourselves around, we have to start thinking politically.”

– Konstantinos Dimopoulos, Transport isn’t technology, it’s politics, How We Get to Next