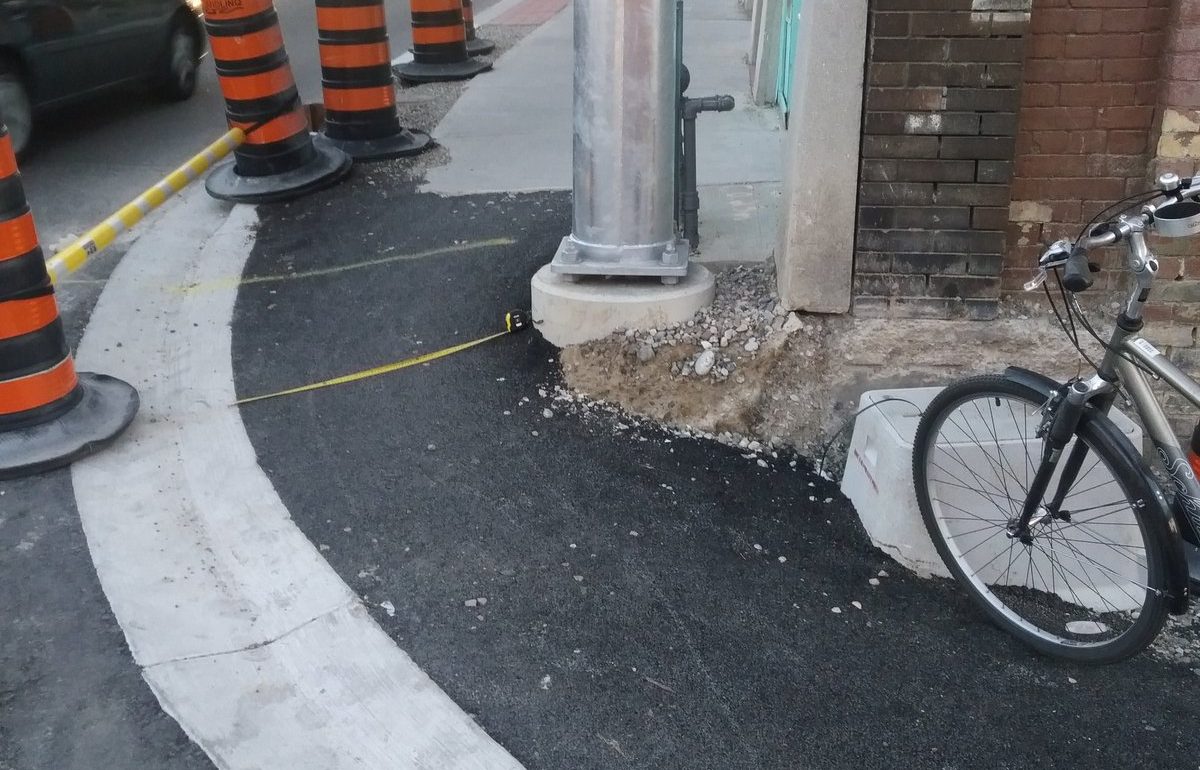 Yesterday, TriTAG member Mark Jackson-Brown shared a picture of the new corner of Queen and Charles:

If you can’t read the measuring tape, the sidewalk width to this corner, across the street from a future ION station and down the block from Charles Street Terminal, has been pared back to barely 1 metre.  One can imagine the challenge of trying to get past a group of people waiting for the light to change, or worse, trying to navigate this corner in a wheelchair.

Why create this uncomfortable, and likely dangerous corner? Because its designers have decided that moving cars quickly through this intersection is more important than pedestrians. Wide corners allow cars to make turns more quickly, especially for larger vehicles and buses that might otherwise delay cars behind them. (It should be noted that no bus routes have turns at this corner, nor is Queen a designated truck route.) But they also make it more difficult to safely cross the street, thanks to faster turning vehicles and longer crossing distances.

(The saddest thing is, even when over-engineering for cars in this case, it doesn’t actually need to be this way.  With the new ION tracks passing right there, motor vehicles have a much bigger effective turning radius and  don’t need to have a wide corner made in the curb. Consider the intersection of Duke and Queen, which provides wide, abundant space for pedestrians, while reducing crossing distances. Where would you rather be walking?)

Such a wide turn radius for cars was totally unnecessary. Queen/Duke handled this exact same situation much better. pic.twitter.com/DVrl9EHwNX

So what can be done to help Waterloo Region get its priorities in order?

There are two online surveys that the Region is currently running for Moving Forward:

The first is a general survey about how you feel about transportation and what you’d like to see the Region do to improve and prepare for the future.

The second survey deals with trade-offs – given limited space or resources in different contexts, should we prioritize active transportation, transit, or cars?

Please make every effort to complete these surveys and push for better transportation priorities, so we don’t end up with more corners like Queen and Charles.