Part 7 in our series on parking in the City of Waterloo draft zoning bylaw.

There’s an old joke that says, the trouble with parking is that it isn’t going anywhere.

If you read the City of Waterloo’s draft zoning bylaw, you might think they took the joke literally. But will we always need parking, especially copious amounts of it? What will the future bring?

We’re on the cusp of some pretty major shifts that will greatly alter how we get around and consequently, how much parking we’ll need.

The future of parking, as envisioned by XKCD author Randall Munroe. Licensed under CC-BY-NC.

Car ownership is headed for a decline. Most Millennials are now out of school and in the workforce, but much to the auto manufacturers’ horror, they aren’t buying  as many cars as their parents’ Baby Boomer generation did. Meanwhile, that bulge of Boomers are reaching retirement age, after which household car ownership tends to take a nose dive. With a declining demand for cars will come less need for parking everywhere.

People are beginning to see transportation as something you can order as a service instead of as an expensive asset you own. This isn’t exactly a new concept – taxicabs have been around since the days of horse-drawn carriages. But other players are entering the scene. Waterloo Region is home to the growing Community Carshare, which allows you to use a car when you need it without owning one, or a place to park it. There are also new emerging ride-sharing services, including Waterloo startup RideCo, which partners with taxi drivers to perform on-the-fly carpooling. In communities like ours, mobility services will help drive more people to light rail from areas outside walkable distances. 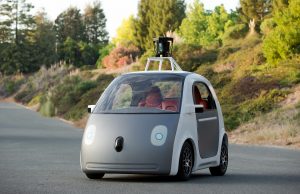 On top of these trends, there’s a bigger shift coming. You can’t have an article about the future of transportation these days without talking about autonomous cars.  Whether you believe the hype about self-driving cars being imminent or if they’re still a decade or more away, once they arrive, they have the potential to radically change how we think about car ownership and parking [1].

Researchers have estimated that self-driving cars could reduce the need for parking in urban areas by as much as 90%. Urban economist Joe Cortright predicts that as a result, cities building parking or maintaining garages today will be left with “stranded assets,” where they cannot recover costs through parking fees once demand evaporates. We expect property owners will also be left with underused parking spaces well before the end of their useful life.

While these are all emerging trends or things yet to appear on our roads, they should factor into what we construct now, as new buildings today will be around for decades to come. We should be setting our zoning standards not to meet the expectations of the past century, but of the next one.

Write to the Zoning Bylaw Review staff and your city councillors, and ask for parking requirements that match the future you want to see in the City of Waterloo’s next zoning bylaw.

Editor’s note: This post is part of a blog series on parking requirements in the City of Waterloo’s Zoning Bylaw Review. Read the other articles in this series:

[1] Some predict driverless cars will hail the end of transit, as the costs of taxis or other services will drop. But this claim ignores two important factors. First, transit can remain competitive, as driverless buses and trains will also lower the costs of providing frequent, all-day service. Second, driverless cars cannot overcome the geometric constraints dense urban areas impose the way shared transit vehicles can.