Removing the 7D/E branches will take away existing capacity on University and Columbia Avenues. GRT will need to evaluate service on these streets, to make sure there is enough capacity to handle the extra ridership on the remaining buses.
The 92 Loop route may need to be upgraded to be an all-day service, to provide enough capacity on University, while providing enough buses with staggered schedules on Columbia to give frequent service to support untimed transfers to the 7 at King & Columbia.

We’ve heard of concerns about the loss of one-way service on the west side of Ring Road, where some of the University Colleges will fall just outside of a 450m walk to a bus stop. While this is on the surface undesirable, there are a number of conditions and possibilities to consider:
On a University campus, the overwhelming majority of riders are young, healthy students who will be able to handle the walk. The Colleges will still be within 600m of all three iXpress stops on campus, which are the cities’ fastest, most frequent and most reliable services, which are all features that support longer walking distances. The University also runs an on-campus shuttle, making a circuit of the campus, stopping at all bus stops on ring road. The on-campus shuttle however lacks a lot of information about frequency or schedules, and the University should work to improve that. Should this not be enough, there are possibilities to still cover West Campus: 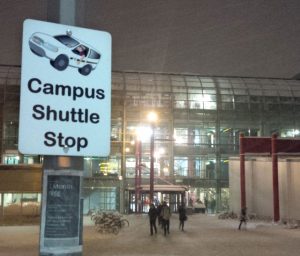 As we mentioned in the last post, we’re like to see a few additional stops on the proposed route, and from talking to GRT at the public consultations, they have been receptive to this feedback, and have stressed that it’s preliminary stop placement at the moment. 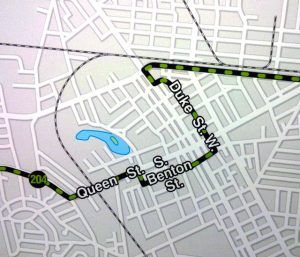 Proposed routing of the 204 iXpress through downtown

Not visible on their website materials, there was a display board where you can see the proposed downtown routing of the 204: Queen, Courtland, Benton-Frederick, and then Duke up to King/Victoria. This is a first for Downtown Kitchener; a route that does not stop at Charles St Terminal. This marks the beginning of a major shift for Downtown Kitchener transit. When ION starts running in 2017, transfers between buses and ION will be made at on-street stops, most notably at King/Frederick and King/Victoria. Similarly, bus transfers will also, in time, be moving to these locations, allowing buses to make trips across downtown without 5 minute layovers in the middle. Even now, most bus routes downtown pass either King/Victoria or King/Frederick, allowing transfers to the 204.

While Duke St may seem odd at first glance for the 204, it is a future-proofed routing, designed to meet the future ION stations.

We’re very excited to see an early rollout of the 205 Ottawa St iXpress. Since the north-east Kitchener routes are all part of this year’s realignments, GRT has rightfully looked at introducing part of the 205 Ottawa St iXpress this year, to avoid restructuring routes a second time in 2017. This will be the first time a bus route has a connection to the Ottawa/Charles 200 iXpress stop, which will start to see more use with this new service.

Perhaps the only disappointing part of the proposed 205 Ottawa St iXpress is that only half of it is being proposed. We’re already looking forward to GRT extending it to the south-west as soon as possible.

The 20 now joins the 5, which was realigned in 2013, in becoming a full east-west cross-town route, running from Victoria St S, to Frederick and on to Victoria St N. It has maintained a detour to Chopin Dr, but is otherwise becoming a very direct route across the city. The pairing of Victoria St S with Frederick, while the 204 has Highland/Queen with Victoria St N, is curious at first, creating an X through the downtown. It matches similar lands on either side, allowing for faster, more frequent 204 service along employment and retail roads, and having a local route 20 service along residential streets. This could be revisited in the future, as these streets continue to densify, and similar service is needed on both routes.

Much requested, Bingemans finally gets bus service. While just a rush hour service to start, this route is the first step, at the very least allowing trips for all-day getaways or conferences. The employment lands at the east end of Shirley Dr will see a drastic improvement, as the new route will run for both rush hours, instead of the current single run in the morning, and two runs late at night, making transit a possibility for hundreds of employees.

Like route 20, we’re pleased to see other crosstown routes come into being such as the 25 on Queen, the 1 on Krug/River and the 2 on Greenbrook. We look forward to future streamlining that will come to the network in the future.

We could go on forever about the these changes, alternate possibilities, and the other routes not touched on in this post, but overall, the proposals, particularly those presented in GRT’s Map 2, are are strong step forward. Many routes are being reconfigured to support a grid system, at least as much as Kitchener-Waterloo’s twisty roads can be a grid. With continued frequency improvements on all lines to support a high frequency network, it will make travel between all points in the cities possible and simple.

GRT still has one more consultation session for the 2015 Service Improvements, this Wednesday, 4-8pm at Emmanuel Village, Bistro Room, 1250 Weber Street E, Kitchener. We encourage you to make your voice heard there, or to fill out your comments on their online form.

6 thoughts on “Thoughts on the GRT 2015 Improvement Plan”