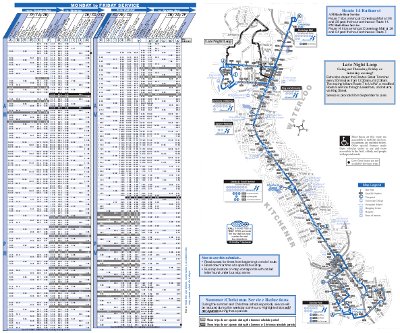 Proposed redesign. The red line is the consolidated Route 7, the icons are iXpress stops (including two additions), cyan is the University Loop, and green is a possible realignment of a portion of Route 8.

The trunk Route 7 itself would follow King, Montgomery, and Weber Streets from Conestoga Mall to Fairview Mall, and would have headways of 10 minutes along the entire length. In the south end, Kinzie Ave would no longer have a Route 7 bus every half-hour, but instead residents would have a reasonable walk to a Route 7 bus every 10 minutes. Route 8 could be realigned to serve the Vanier neighbourhood, previously served by 7A and 7F. Alternatively there could be a local circulator or some other realignment to ensure little service is lost.

In the north end, much of the demand for service on current Routes 7D (UW via University) and 7E (UW via Columbia) is single-corridor in nature, or it is able to be served by the iXpress. Most people use the 7 to go along King St or to go along University Ave or Columbia St. Many trips which do use both portions can be served by the iXpress – but this requires the iXpress to have better frequency than Routes 7D + 7E, which it does not right now. People often will take the first bus that comes; many regularly take the 7 instead of the iXpress to get to UW simply because it shows up first. This is flexible demand.

The iXpress would get new stops at Victoria and Cedar Streets to match the future Rapid Transit stop spacing and better take over some of the current demand from Route 7.

The local demand in the university area – which is seeing capacity issues on the 7E – would be served by a bidirectional University Loop route. The simplest routing is based on the current 7D and 7E, and would follow King, University, Ring Road, and Columbia. The routing could be changed later, perhaps to go to Westmount Road instead of entering the UW campus and to go as far as Weber (i.e. to the Conestoga College campus) instead of just to King.

For simplicity, TriTAG’s feasibility analysis is based on current daytime frequencies and run-times for routes between Fairview Mall and Conestoga Mall. Scheduled run times for routes are: 43 minutes for iXpress, 19-23 minutes for Route 7 branches south of downtown, and 23-26 minutes for Route 7 branches north of downtown. The University Loop would take about 20 minutes or less. Doubling the time to account for both service directions, dividing by the headway, and rounding up gives a ballpark estimate for the number of buses needed on the route. Given the frequency planned for this year (10 minute headways on iXpress, 15 minutes on 7C, and 30 minutes on other Route 7 branches), the number of buses required for existing routes during the day is: 9 buses for iXpress + 6 buses for the Route 7 branches in the south + 8 buses for the Route 7 branches in the north. Adding in the planned extra Route 7E bus this year, that makes for 24 buses total.

In the current approach to Route 7, each branch is scheduled separately and suffers delays separately, but all combine on a single main corridor. The result is a long scheduled layover at the Charles Street Terminal (in the middle of the route), and poor reliability overall. Instead of actually getting a bus every 7-10 minutes (as the current schedule has it), buses bunch together. It’s not uncommon to see three or four Route 7 buses in a span of five minutes, and then 15 minutes before the next one. By consolidating service on a single route, Route 7 could go to headway-based scheduling, which would allow a focus on service reliability on the trunk.

So with the same resources that get us a mess of complicated routes and a local service being more frequent than a rapid service, we could have a more frequent rapid service, an understandable King Street route, and a district circulator route, all of which come frequently enough that no schedule is needed. This is how we start building the easy to understand transit network that will get more people to take transit and leave their cars at home. If you support this, please make sure GRT knows about it using this link right here.