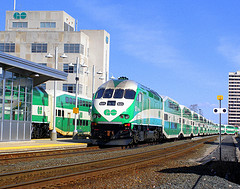 GO train in Hamilton. (Photo by Tom Flemming, via Flickr.)

About a year ago GO Transit completed its Environmental Assessment (EA) for a rail extension to Kitchener, and half a year ago the extension was approved. It still awaits funding for the necessary track improvements, though GO Transit has already been laying the groundwork for the planned Guelph station. Service at the start of operations (planned for 2011) would include four morning trains from Kitchener to Guelph and Toronto, and four afternoon and evening trains in the reverse direction. It would be able to add reverse-peak commuter trains if there is sufficient demand. However, it has been claimed that “GO trains will be slow trains”, and so it is important to give some context for the planned GO train travel time between Kitchener and Toronto.

Lisa Harmey writes that the University of Waterloo’s recruitment materials say (page 6): “Take the bus to Toronto for the weekend – it is only an hour away!”.* I’ve heard this sentiment elsewhere, and even believed it myself. But any way you slice it, the trip time between Kitchener-Waterloo and Toronto is closer to two hours.

By car, it’s a full 110 km from the Kitchener-Waterloo core to downtown Toronto. This trip includes many bottlenecks, such at the ramp from Highway 8 to Highway 401 and Highway 401 itself between Mississauga and Toronto. Then there’s getting to downtown, on congested roads or highways like the Gardiner. Once you get there, you have to find parking. You can avoid this by parking at a subway station near Highway 401, but then it’s still half an hour to get downtown. In rush hour the trip can take two hours by car, and I’ve had it take longer than that off-peak.

Greyhound’s fastest, most express buses are scheduled to take 1h 35m between downtown Kitchener and downtown Toronto; but many buses go through Guelph and take longer. GO Transit takes 2h 20m with a transfer at Mississauga, or 2h 15m with a transfer to the train in Milton on a couple of early morning weekday runs. Its direct express Friday afternoon buses from the University of Waterloo to Mississauga still result in a total scheduled trip time of 2h 25m between UW and Toronto. VIA Rail has three trains a day from Kitchener to Toronto, which are scheduled to take between 1h 35m and 1h 55m.

With that in mind, we can return to the subject of GO trains. The prototype schedule (see Appendix B of the EA) shows the trains taking 2h to travel the full 12 stations between downtown Kitchener and downtown Toronto, or less from the Breslau park-and-ride lot. Considering the congestion and hassle faced when commuting by car, and the bus/car trip times in the best circumstances, that’s not bad at all. When GO expands to all-day service it will prove quite competitive with Highway 401 for getting to downtown Toronto — unless, of course, Ontario spends hundreds of millions of dollars on Highway 401 widenings in a futile attempt to catch up with induced demand. 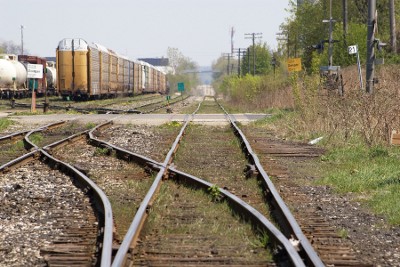 The north mainline track looks like it could use some investment. (Photo by Sylvan Mably, taken north of downtown Kitchener.)

Though I’m focusing here on the trip to Toronto, I should note that most of the commuters from Kitchener are not expected to go as far as Toronto — Guelph is expected to be the single biggest destination on the line from Kitchener-Waterloo. And lastly, it is a legitimate point that the trains will still be a lot slower than they could be. The track won’t allow for very high speeds and trains will have to deal with freight traffic. Increased investment in the line would allow for much faster — and perhaps electric — trains, that might actually be able to bring the trip down to the coveted hour from end to end.

For now, if we let go of the false notion that Toronto is only an hour away, a comfortable two-hour train ride starts to seem a lot more reasonable.

*Word is that the University of Waterloo will be referencing the distance to Toronto from now on.

10 thoughts on “GO Trains to Toronto Will Be Competitive”