Lots of changes are happening in your community, and you have a chance to influence them. Here are some upcoming public consultations you might want to participate in: 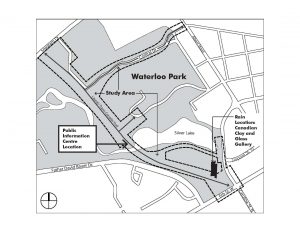 The City of Waterloo is continuing to seek input on the central promenade through Waterloo Park, part of the Laurel Trail. There are two opportunities for input:

City of Kitchener staff are looking to build cycling facilities along Wilson Ave from Wilson Park to Homer Watson Park, as part of the city’s cycling route from Cambridge to downtown. They’re currently working on plans for lanes from Wilson Park to Fairview Park Mall. (The section of Wilson south of Fairway Road will require changing the road configuration and will form part of an upcoming Environmental Assessment.)

A public consultation is taking place Wednesday May 4, 7-9pm at Howard Robertson Public School, 130 Morgan Ave. Stay tuned for more detail on the plans, and how to give feedback.

The City of Waterloo is conducting a study to figure out what its parking needs will be for Uptown over the coming years, and develop a financial model for parking. Currently, overall parking use peaks at just 60% of capacity, (even on-street parking), meaning that we devote more space to parking than we actually need today.  The price of parking also has a significant impact on the transportation choices people make.

Initial feedback can be given on Engage Waterloo from May 2-11.

Station area planning is intended to update the zoning, design of streets, and amenities to support increased growth and better walkability around ION stations.

Waterloo released its draft plan (~30MB pdf) for light rail station areas last week, and will be hosting an open house public consultation Thursday May 12 from 3:30-7pm at the Memorial Rec Complex.

The Region is planning some new water infrastructure in Kitchener and Waterloo, and are eyeing part of the Iron Horse Trail as a preferred route for a new water main. Construction could disrupt the trail for several months in 2017 or 2018, but could also be coordinated with planned trail upgrades as part of the Iron Horse Trail Improvement Strategy.

If you want to learn more or have feedback for the Region, there will be two public consultations:

You’ve probably seen the King Street grade separation begin to emerge in downtown Kitchener. The Region will be holding an open house on the King & Victoria Transit Hub on Thursday May 19 from 4-8pm in Regional Headquarters, 150 Frederick Street, Kitchener.

Waterloo is reviewing its zoning bylaws. We’ve had lots to say about parking policy in the draft bylaw, but also want to make you aware of how you can talk with staff about what you’d like to see. There are a couple of drop-in sessions at City Hall where you can meet with staff and ask questions: