In our last post, we raised some concerns with the Region’s recommended design for the reconstruction of University Avenue between Erb Street and Keats Way.  In particular we have issues with the inadequate separation from motor traffic, and the ability to maintain the lanes in winter.  Here is a quick overview of a design that we believe better addresses these issues.

Illustrated below is the Region’s recommended design.  It features 1.5m bicycle lanes separated from motor traffic by 0.6m buffers.  It also includes sidewalks on both sides of the street – there is currently only a sidewalk on the east side. 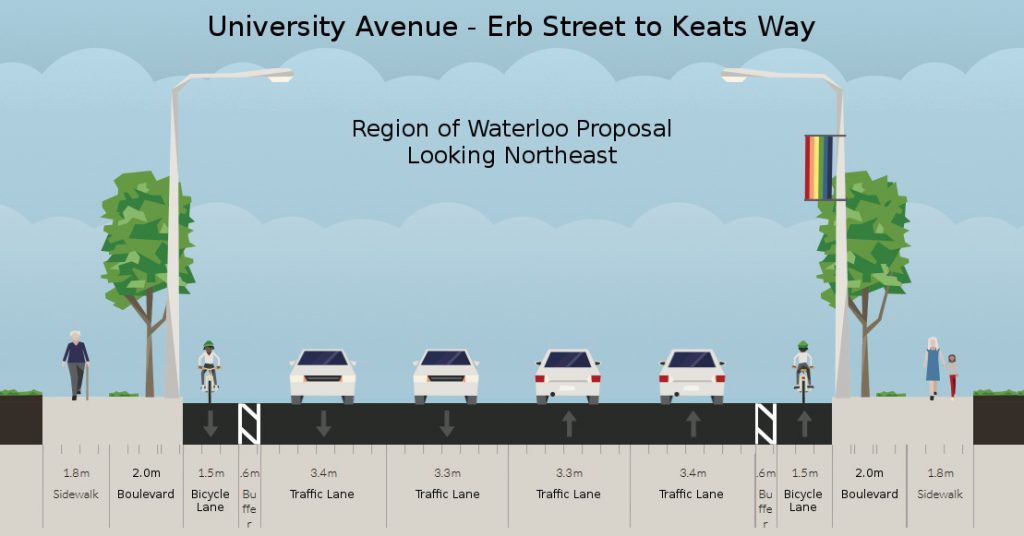 To address our concerns regarding bicycle-car separation and winter maintenance, we would prefer that the bicycle lanes be moved off the main roadway.  Illustrated below is a road layout that takes up the same space as the region’s proposal but provides bicycle paths separate from the main roadway. 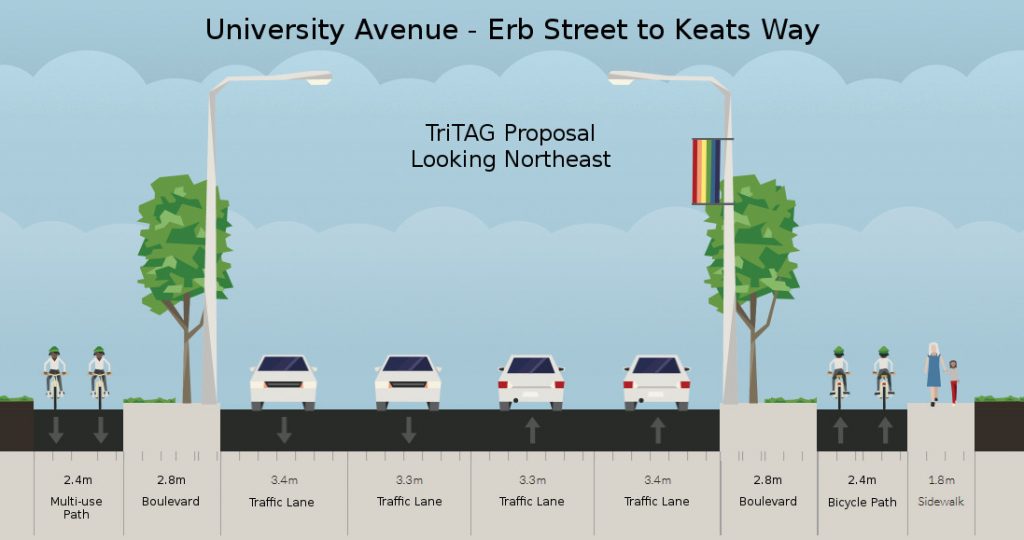 This arrangement replaces the two one-way bicycle lanes with two one-way bicycle paths.  This type of infrastructure is common in the Netherlands, where it is allows people of all ages and abilities to cycle to their destinations even along fast and busy roads.

In this arrangement, the boulevard forms the buffer between bicycles and cars, freeing up the space from the two 0.6m painted buffers to be used for other purposes, such as widening the bicycle path.  It is important to note that off-street bicycle paths need to be wider than painted lanes, since cyclists do not have the option to leave the lane to overtake a slower cyclist.

Unlike in the region’s plan, we do not propose to add a new sidewalk on the west side of the road.  There is no access to the properties on the west side, and there are few origin-destination pairs that would make for a competitive walking trip.  As a result, the potential volume of pedestrian traffic would be minimal.

To complement this shared arrangement, there needs to be thoughtful intersection design.  The current standard designs for multi-use paths where the path ends at intersections and cyclists are expected to dismount are not acceptable. Fortunately, there are good examples of how to integrate off-road bikeways with intersections.

Omitting the west sidewalk saves 1.8 metres in the first improved design alternative, which can be allocated instead to widening the boulevard and the bicycle paths.  But this is not a critical component of the design.  There could be sidewalks on both sides, or on neither side, and the effect would be generally the same.

The end result of this design would be to make cycling along this segment of University Avenue an attractive option for people of all ages and all levels of interest in cycling.  While the remainder of University Avenue will remain hostile for now, we urge the Region to use this project as a first instance of a new standard of cycling infrastructure for arterial roads that is safe and comfortable enough for everyone.

3 thoughts on “An alternative design for University Avenue”