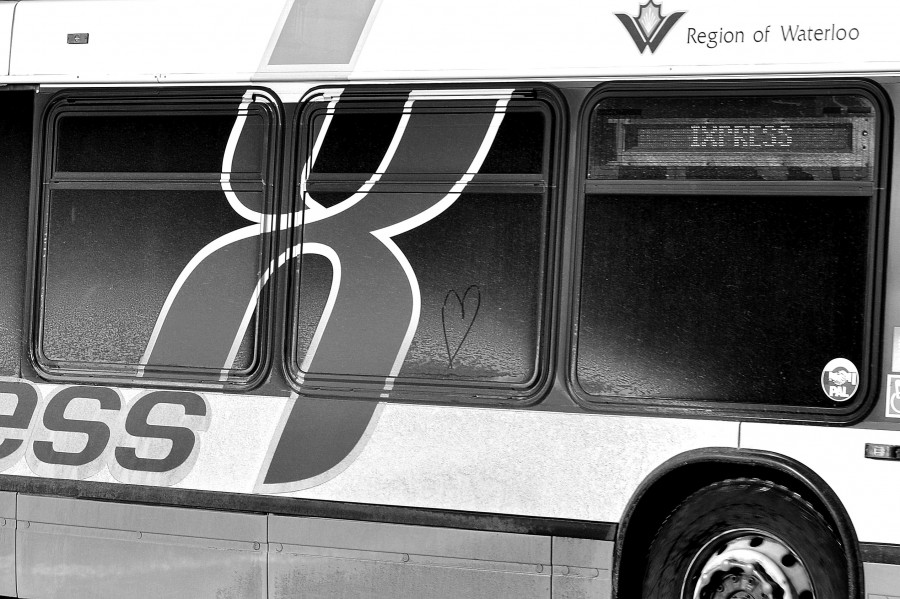 The Region of Waterloo’s Planning and Works agenda has come out for next Tuesday, including proposed 2013 service improvements in Waterloo and the service planning implications of cuts to existing transit service in the 2013 budget.

Public consultations on the service changes will be held at various locations in Waterloo and Kitchener between March 18 and 26. 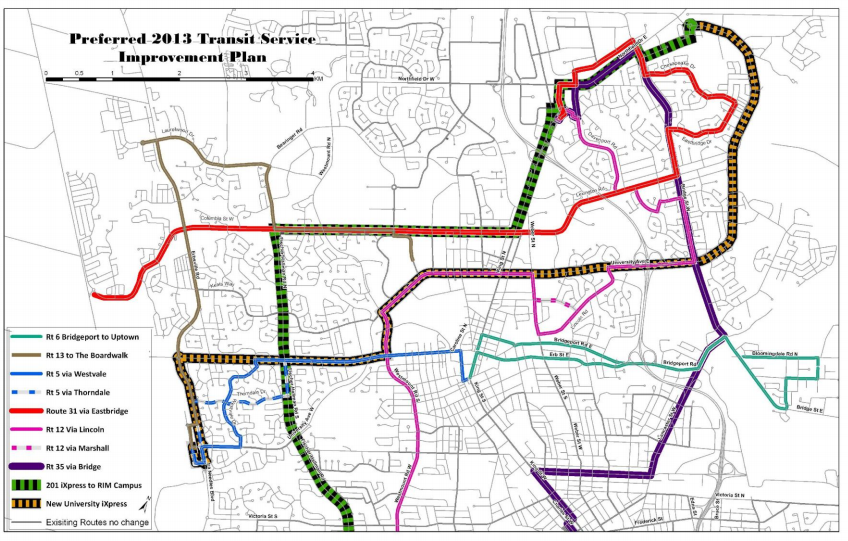 We are very pleased to see a movement towards a grid system. A trade-off is present here however: it will take longer for customers within the neighbourhoods bordering Bridge Street to reach their bus stop. Once they get to a bus though, it will take much less time for them to reach their destination. We believe this change represents a net gain for GRT users and residents in general. [1]

Also of note is that route 29 has been saved from a ridiculous jog prior to heading to The Boardwalk. The 13 appears to have received a little jog in the north west to serve the Public School, but it should not delay travel time by very much.

With the 12 going down Weber all the way to Lincoln, it is now contiguous with the 8 all the way from Westmount/Union to Weber/Lincoln. This is a distance of over 5 km, a bus runtime of 18 minutes: a necessary doubling-up because of demand from the two Universities and Conestoga College. This could be made more efficient, however, by interleaving scheduled routes such that a bus passes every 15 minutes instead of two buses arriving at almost the same time every 30 minutes. This increase in effective bus frequency could improve the perceived reliability and convenience of transit, increasing ridership.

There may be some backlash, however, among those who are faced with a longer walk to the bus while at the same time, losing summer service frequency. Routes 200 and 201 are slated to lose summer service frequency, it remains to be seen whether or not these cuts will save the Region money or cost more in lost potential ridership. Evening service may also be reduced on several routes, making the bus a far less reliable choice for transportation.

Frequency cuts aside, we at TriTAG are pleased with the overall direction of the proposed 2013 GRT service improvements. Simpler, more direct routes are not only faster and easier to understand for passengers, but also allow for more frequent service as shorter travel times mean less operating expense per trip. We hope Grand River Transit will continue and accelerate this trend in improving route designs across the Region, in time for better integration with light rail and adapted bus rapid transit in 2017.

[1] What can GRT do to support those who might find they will have a longer walk to a bus stop? The 35 line would do well with bike racks at every stop, so that people have the option of cycling through quiet residential streets to reach their bus stop, but be given the option of taking a bus if they’re not comfortable cycling on busier roads.