When a bus leaves a would-be rider behind, that helps turn that rider off transit as a viable means of transportation. At a time when Waterloo Region is actively attempting to promote transit services and increase ridership this is not acceptable. By hindering the perception of transit, persistent overcrowding also has the potential to decrease support for transit funding, thereby exacerbating the problem. Particularly during a time of recession, it is critical that transit is available to those who need it. And considering the longer term, investment in transit is more cost-effective than is the road expansion that insufficient transit spurs. Hard economic times are an opportunity for the encouraged growth of transit, and there is a cost to failing to take advantage of that opportunity. Hopefully Council realizes this and approves the recommended budget issue.

This November, we asked people to send in photos for the Sardine Challenge, and we’d like to thank all who participated. The below photos should help illustrate the situation on a number of Grand River Transit’s routes. 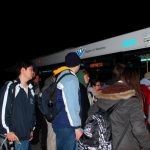 People Loading Onto the iXpress at Charles St Terminal – 7:00pm 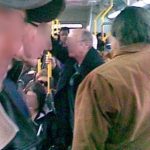 An Overcrowded Route 7 bus travelling from Uptown to Downtown – 4:00pm 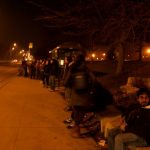 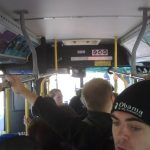 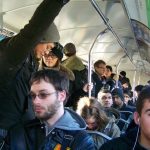 An Overcrowded Route 12 University and King Bus – 9:15am

2 thoughts on “Sardine Challenge and Overcrowding on GRT”